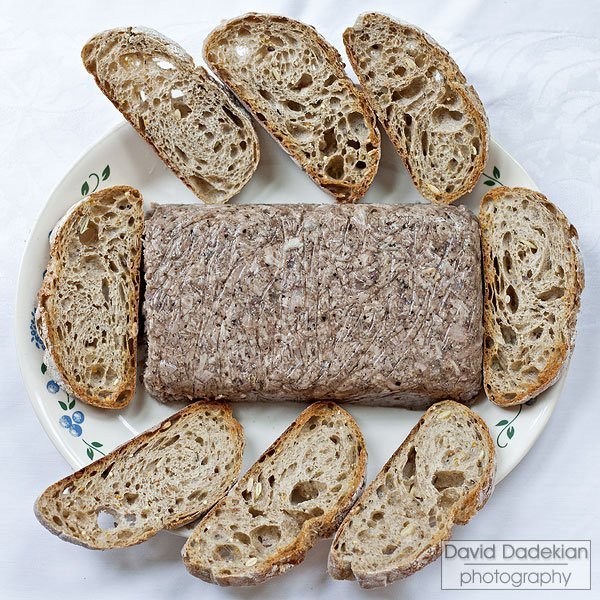 Back to familiar ground for this month’s Charcutepalooza challenge, though it was only my second time working with pig’s feet, so it wasn’t totally familiar. You read that right, pig’s feet, as in euphemistically speaking, trotters. Yes, there are photos of said trotters further down this page. If you don’t want to see severed pig’s feet I would suggest you read a different story in that box to the upper right.

I’ll admit, working with trotters for this challenge wasn’t exactly like working with any piece of meat, there are some mental challenges to all that bone and gristle, even for someone like myself who has aided in the slaughter of animals and broken down whole carcasses. Interestingly, it became very clear that that perception is obviously learned behavior. While my wife Brenda didn’t want to be in the room with the trotters (and would probably be someone who would read a different story than this one to avoid the photos), my two daughters had no problem with the meat at all. In fact, my 18-month-old was fascinated with the process as I cleaned and prepped the trotters to go into the stock pot, even poking and sniffing one.

So what did I do to achieve the shiny loaf that you see in the above photo? The process is like making any type of stock from meat and bones: animal parts in a pot, cover with liquid, bring to a simmer for several hours. Except in this case you’re not making the stock in water with some aromatics, but in highly seasoned water. I used the same seasonings as outlined in Ruhlman & Polcyn’s Charcuterie recipe for headcheese, but since it’s been a very hectic summer and I just didn’t have the time or energy to acquire a pig’s head, I went a different route for the meat. Yes, I did have a pair of trotters in my freezer (don’t you?) but I didn’t think that would produce enough meat for my terrine. I was out of ham hocks (pork shanks), but I did have some beef shanks, so I decided to use those with the pig’s feet. Now because I was using beef I wanted to try something different than the traditional 2 cups of a dry white wine, and I happened to have a bottle of NV Port that had been open for a couple of months, making it past it’s prime. Turned out there was 1 1/2 cups of Port left in that bottle. Not wanting to skimp on the required liquor, I brought it to two cups with a little Patron. Why not, right?

So into the pot everything went and three hours later I had a big platter of, let’s be honest, messy animal product and about 7 cups of purplish-brown gelatinous liquid. This is not the sounds good stage. But we’re getting there. After some scrupulous separating of meat from everything else (and a little frying of the pig skin because why waste cracklins) I was ready to assemble my terrine. Instead of chopping up the meat by hand, and because I was reasonably certain Brenda wouldn’t want to eat the terrine if she saw chunks of the various meat suspended in there, I pulsed all the meat in my food processor a few times. I may have pulsed a little too much because the finish terrine, while it sliced beautifully, tended to crumble as you ate it, but it tasted great so who cares? I lined my loaf dish with plastic wrap, pressed in the meat and then very slowly added the stock so that it would get absorbed and into every tiny nook and cranny between the meat. When the stock began to pool up on top I tightly folded up the plastic wrap and put the dish in the refrigerator overnight.

Today, what more can I say but, we ate. Even though I added a good amount of salt and pepper to the meat before I pulsed it in the food processor, I still felt the final terrine needed more salt. But other than that, the seasonings, including the Port, came through very nicely. As for the lack of salt, it was nothing a sprinkling of very coarse Maldon sea salt on top couldn’t solve, which was probably even better than getting the salt right in the first place. The terrine was really a lot of fun this month, so once again I want to thank Cathy Barrow and Kim Foster for this whole wonderful Charcutepalooza experience. I can’t believe we’re 2/3rds of the way through. 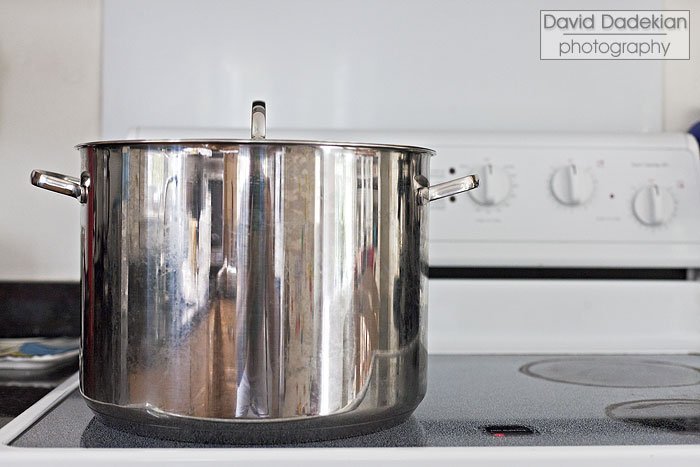 A 16-quart stock pot, because you need the space for the trotters 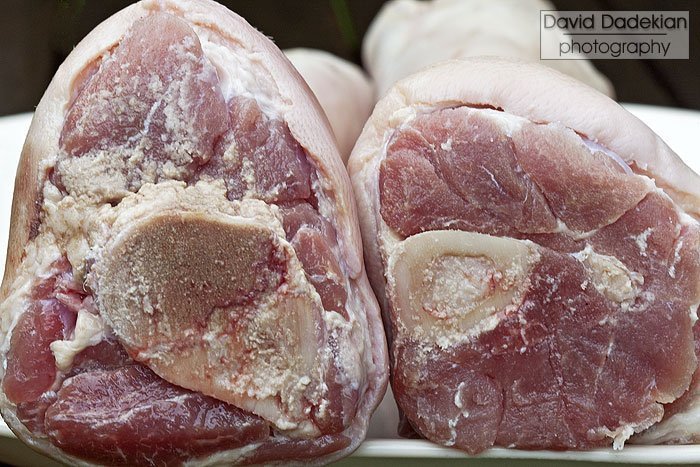 Trotters, as you can see there is still a good amount of meat to be had 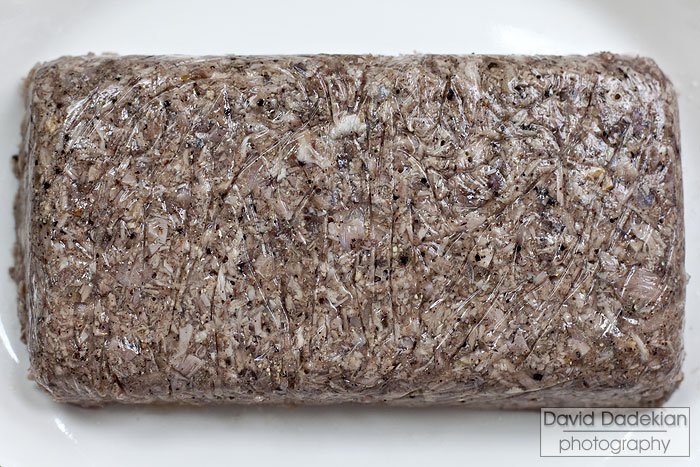 The final terrine from above, those lines are the imprints from the not-quite-smooth plastic wrap

Side view of the terrine, I went with loaf-shaped thinking it will be good for sandwiches. 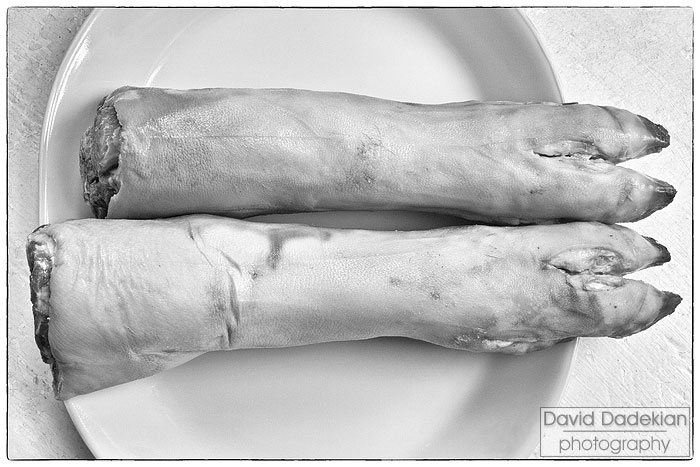 Trotters. See, that's not so bad now, is it?