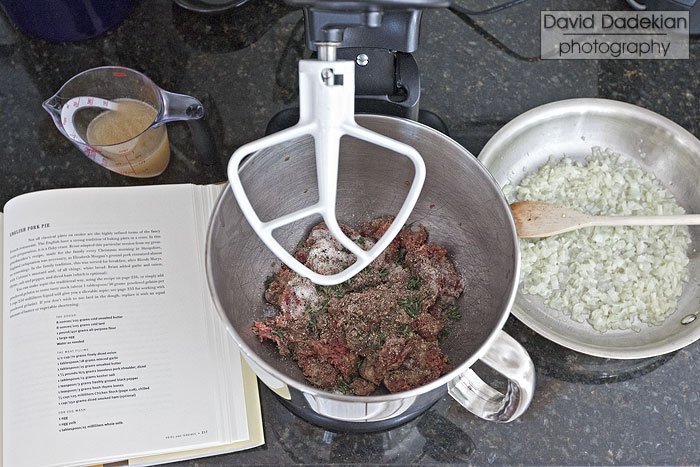 Some of these Charcutepalooza posts have been short because of frustration (see stuffing sausage). In this case, this post is on the short side because everything worked out so well and was so darn easy. Either I’m learning to deal with meat mess much better (none in my daughter’s hair this time!) or I’m getting better at running various animal parts through both ends of my Kitchenaid mixer. Even the dough making part of this month’s challenge went smoothly, and I don’t have the best record of dealing with doughs (caused by more of my finely-tuned-lack-of-coordination—there’s been flour all over my children in the past too). I won’t go so far as to say my dough work was a huge success, but this was definitely a very smooth challenge for me. Which is good because Mrs. Wheelbarrow is already teasing us via #charcutepalooza on Twitter with a super difficult challenge for October.

As you can see from the photos on this page, I decided to make an English Pork Pie, and in a rare moment for me, I decided to exactly stick to the recipe in Ruhlman & Polcyn’s Charcuterie. Well, sort of. In sorting one of our freezers after a blackout (thanks, Hurricane Irene!) I noticed that I had a little over a pound of venison left from earlier this year. I grabbed a few ounces of pork fat to round it up to a pound and a half, and ground it all as a substitute for the pork in the recipe for English Pork Pie. That’s the ground venison in the photo above, along with some herbs and spices in the bowl, waiting for the addition of the sauteed onions and garlic to the right and the cup of chicken stock to the upper left. It all came together quickly and easily, and now I had the insides for English Venison Pie.

Leaving that to chill, I tackled the dough. Maybe I had just the right atmospheric conditions, or I was just plain lucky, but the dough came together as easily too. I’m not saying it was pretty, and as you can see in my four-step process photos below it could’ve used a bit more finesse, but it was good dough and I didn’t make a huge mess. Note regarding photos: powdery substances like flour and my camera & lenses do not mix. That brings us to the four-step photos below, and I know I sound like a broken record (ask your parents), but laying out the dough and the meat and sealing it all up, came together easily too.

A few notes: I made an aspic with chicken stock to pour inside. I’m not sure if it would’ve worked as it didn’t look like much space, but I was going to try. That is until I wisely asked my wife if she would eat the Venison Pie if I encased it in meat jelly. She said she’d pass so I passed on adding the aspic. Also, while I thought I was being clever baking on a Silpat for easy removal from the pan, in retrospect, I wouldn’t use it again. The bottom of the pie was rather soggy. I’m not sure the Silpat contributed to that, but I’ll try it without next time. One last note, this was not the most attractive dish once I sliced into it. I was going to get out a different lens and play around with the slices, but then I tasted it. As much as I love making photos of food, I really love eating great food better. We devoured this pie. The ground venison with pork fat was moist and very flavorful and the crust tasted fantastic. I know I strayed with the meat, but Ruhlman & Polcyn’s recipe was perfect.

It’s hard to believe another month has passed in The Year of Meat and now we’re three-quarters of the way through Charcutepalooza. As I do every month, and I will continue to do so even when Charcutepalooza is over, I send many thanks to  Cathy Barrow a.k.a. Mrs. Wheelbarrow and Kim Foster a.k.a. The Yummy Mummy. Also, the community that’s sprung up around these monthly challenges is very fun, warm and constructive. So if you’ve been reading along but not playing along, pick up the Twitter and find #charcutepalooza. 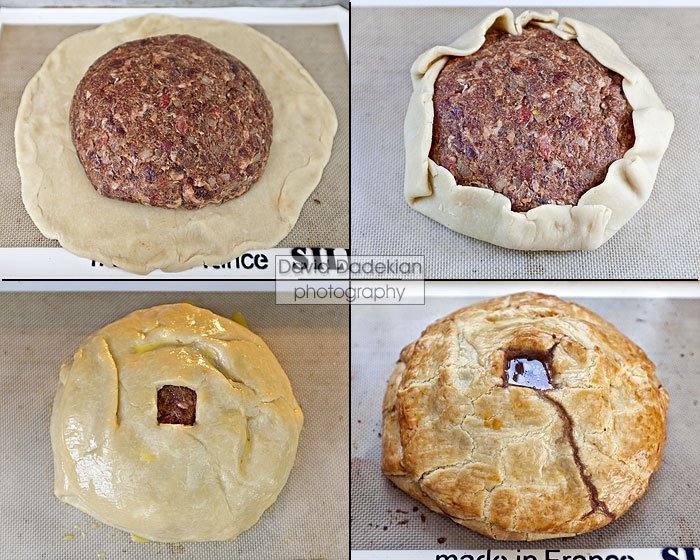 Four stages of making the pie 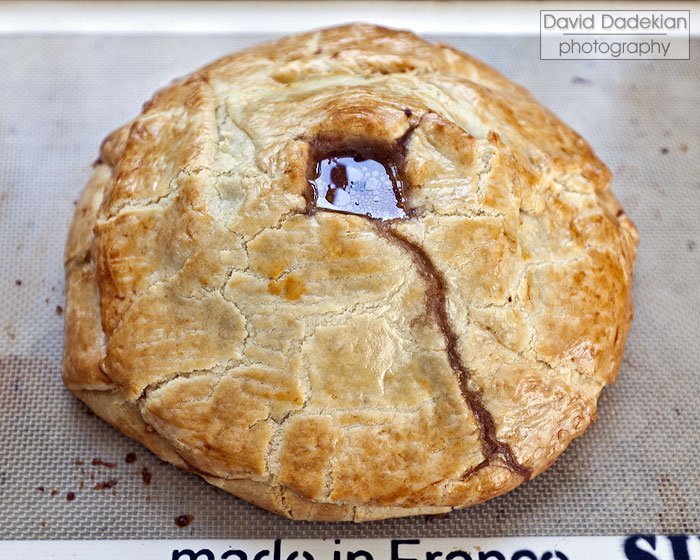