Visitors to the Boston Public Market are about to get a taste of Rhode Island’s innovative, healthy and delicious artisan food products at the “RI Local Food Bazaar,” a short-term booth that launched today and will be open until September 3.

The Boston Public Market, which celebrated its second anniversary today, is a 28,000 square foot indoor year-round marketplace on the ground floor of the Haymarket T-station building abutting both Boston’s Greenway and Government Center. It features fresh, seasonal food from 40 farmers, fishers and food entrepreneurs located exclusively in New England.

In August 2016 the Market had 203,000 visitors. Rhode Island makers have been eyeing the high-volume market as a potentially lucrative retail channel but have been deterred by the high cost of staffing a booth the full 82 hours the Market is open each week: 8 am-8 pm Monday to Saturday and 10 am to 8 pm Sunday.

The nonprofit Partnership for Greater Providence is sponsoring and organizing the booth as a sales co-op. The 17 Rhode Island entrepreneurs participating will take turns one day at a time, selling the full array of brands.

“More and more, stakeholders in Providence and Boston are collaborating and forming partnerships, said Betsy Santarlasci, The Partnership’s Executive Director. “We are hoping that if the sales are great, the sales co-op model will be a viable format for the makers to establish a permanent Rhode Island booth. Our State is a leader in food, and we deserve a prominent presence in this all-New England market.”

The rent and other costs are being paid by the Partnership for Greater Providence through an Industry Cluster Grant awarded in 2016 by the Rhode Island Commerce Corporation. The design firm of Firebox Creative has donated graphic design and merchandising services to get the booth up and running. Firebox is owned by Paul Kubiski, the maker of Bootblack cocktail syrups sold at the Booth, and his partner Jackie Duhamel.

The booth is located between Sweet Lydia’s chocolates and Union Square Donuts, adjacent to the Market’s centrally located communal dining tables. Shoppers who drive pay a $3 maximum for 3 hours in the Haymarket Garage with purchase validation. 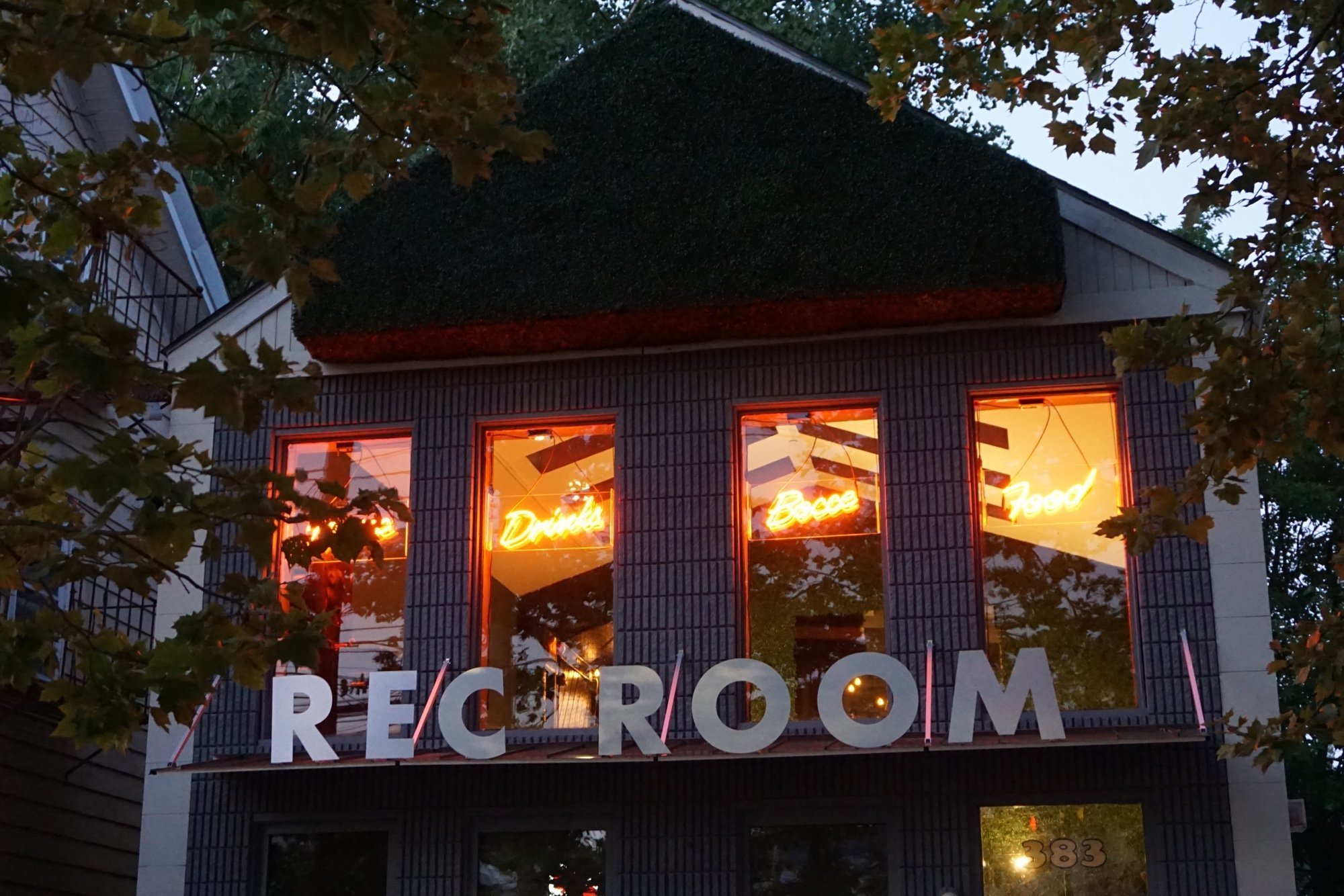 A new high-concept restaurant and nightclub, Rec Room PVD, will offer patrons an experience unlike anything currently in Providence: an indoor bocce court as the focal point of an interactive social atmosphere, a chef-driven menu that spins highbrow concepts on ballpark fare, and an after hours nightclub with a floating DJ booth spinning curated dance club music.

Rec Room PVD’s menu will satisfy those who love ballpark food but crave thoughtful flavor pairings and occasional hints of spice. The team drafted a starting line up of ballpark fare, then stepped up the flavor profiles by infusing ingredients from Korean, Thai, Japanese, Spanish, and American cuisine. Nosh on:

“I’ll look to chili powder, coriander, or paprika before I look to salt,” said Culinary Director Dom Hayman. “That’s part of my cooking style.” As for his tendency to play with spice, Hayman said, “The spice will be evident but not overpowering.”

Alongside a ballpark-inspired menu, patrons will sip craft beers and cocktails influenced by famous outdoor sporting events around the world, including: 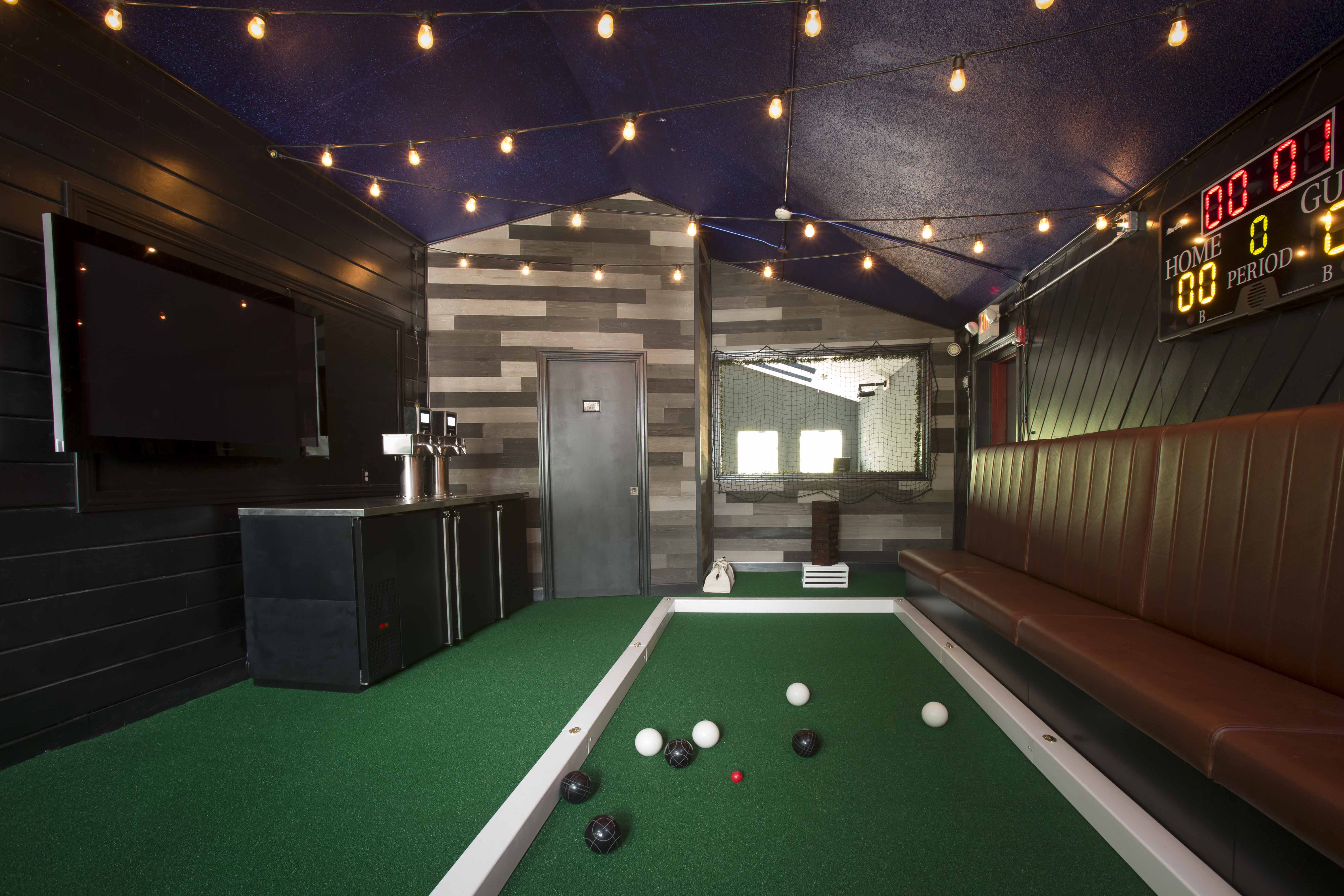 Sporting events will be as much of a draw as the food. With a 150-inch projector screen and four additional TVs, Rec Room PVD will host a number of door charge events coinciding with popular live events such as Pay Per View matches, championship sporting events, and award shows. The rare indoor bocce court will host gaming tournaments and a regular bocce league, without disrupting service on the main floor. Private event hosts will enjoy several setup options.

At 10 p.m., Rec Room After Hours will pump curated dance music from a custom built, floating DJ booth. Guests will enjoy top grooves from the 1980s to the current year. With co-partner Marvin Barksdale’s connections to the music industry, top name DJs are expected to fill out the lineup.

Behind the launch of Rec Room PVD is the story of Marvin Barksdale, a Brown graduate who cut his teeth developing and operating restaurants in New York City, striking culinary and pop culture gold with Seoul Chicken, which was reviewed by the New York Times and GQ. Seoul Chicken became a destination for art exhibits, book signings, and entertainment and media insiders. Celebrities A$AP Rocky and Bobby Schmurda were patrons.

Now, Barksdale brings his star-studded success to Providence, where he went to college and has lived intermittently since 1998. While Barksdale has launched restaurants for others, Rec Room PVD is the first restaurant he has designed, curated, and owned — down to sanding the maple molding.

“I’ve spent most of my career looking for ‘white spaces’ where I can partner with creatives in building one of a kind narratives,” said Barksdale. “Rec Room PVD was an opportunity to connect everything I’ve picked up regarding design aesthetic, legal affairs, business development, and restaurant operations to serve a city I’ve loved for nearly twenty years. You won’t find anything like it in Rhode Island.”

Culinary Director Dom Hayman and Operational Director Jasmine Beidleman are Barksdale’s co-partners. Hayman is a Johnson and Wales graduate who met Barksdale in college as members of the same cross-campus fraternity, Kappa Alpha Psi. Previously, Hayman worked at Costantino’s Venda Ravioli, Federal Reserve Event Space at The Dorrance, and Shula’s Grill at the Providence Hilton. Rec Room PVD is his first gig as Culinary Director. Beatleman brings a wealth of experience in restaurant operations and culinary management, which will be vital to the success of Rec Room PVD. She has served as operations manager at Seoul Chicken, Soul of the Space Catering, and Lott 77, all in New York City.

“Food is increasingly taking center stage in Rhode Island as a driver of economic development and a way to distinguish the unique culture of our State.” Says Hope & Main Founder, Lisa Raiola, “We are celebrating the hard working entrepreneurs, chefs and food producers who are making this happen.”

“This event creates relationships and builds culinary based networks that end up connecting the entire culinary community in Rhode Island and surrounding areas,” said Daniel Van Etten, Chairman of the Board of the Rhode Island Chapter of the ACF. “Together with Hope & Main, we are committed to Rhode Island’s culinary arts reputation, by providing the tools and resources to help every aspiring chef or food entrepreneurs’ dreams become a reality.

Guests will be able to bid on a spectacular offering of New-England themed silent auction packages (many of which feature Peterboro picnic baskets) containing Hope & Main-made products, unique food experiences and gift certificates from acclaimed local restaurants and attractions. The night will end on a sweet note with a towering dessert buffet of Hope & Main member companies’ cookies, biscotti, toffee, macarons and other confections. Live music provided by Warren-based Jay Proctor band. The event kicks off at 4:30pm at Hope & Main, 691 Main Street in Warren, RI.

The SeeFood Differently Lobster Boil is proud to be a minimal waste event. Thanks to Packaging & More, the majority of tableware and drinkware is eco-friendly and compostable. In participation with The Compost Plant, all food waste and compostable tableware will be responsibly collected and transformed into nutrient-rich soil amendment.

Tickets are $100 and can be purchased online at www.makefoodyourbusiness.org/lobsterboil, or, in person at Hope & Main’s Schoolyard Market. The event is expected to sell out for the second year in a row. Net proceeds will benefit nonprofit organizations Hope & Main and the American Culinary Federation. Your ticket helps small, local food businesses to launch and grow, and provides scholarships for local high school students to further their culinary education.