Sometimes, as the poet Burns wrote, “the best laid schemes of mice and men often go awry.” That isn’t to say I didn’t grind meat for this month’s Charcutepalooza challenge. Nor is it to say the final product wasn’t very tasty. It’s that, well, things went awry. Which is why there are only two “before” photos of my sausage making and none of the sometimes-food-porn that I make of the final product (see February’s “The Salt Cure: bacon & pancetta” for glistening pork love).

I love making sausage. I’ve been making it for years. Even when I lived in a studio apartment and only had a tiny kitchenette, I kept a food processor on what ridiculously little counter space I had and would pulse up all kinds of sausage patties. Since then I’ve graduated to a KitchenAid mixer and the very first attachment I bought was the sausage making kit. Which isn’t perfect, I know, but unless you’re going to buy me this beautiful beast, I don’t want to hear it. So when I saw that May’s Charcutepalooza challenge was grinding, I wanted to come up with something that was an additional challenge for me.

Usually I would play with recipes, experiment with different flavors and try something different in the mix. Something that would set me off on a new path. However, having made both merguez and chorizo in the past from Ruhlman & Polcyn’s Charcuterie recipes, I knew that for me they are two of the most bulletproof recipes in the book. I really like them both the way they are (though in typical I-must-do-things-in-the-kitchen-my-way fashion I’ll admit to doubling the red wine and nixing the chilled water in the merguez recipe). So I headed downstairs to the freezer and perused our inventory whiteboard attached to the door to see if it would spark some improvisation.

I knew it would be goofy to share that I have a whiteboard attached to our standalone freezer listing the contents of the freezer, but I didn’t realize how weird it would be describing it.

In the freezer we have a lot of lamb. I love lamb. My grandmother used to make us rib chops all the time and ground lamb is very common in many Armenian dishes. I really love lamb fat too, and we had a few pounds in the freezer, so I decided to use it instead of any pork fat this time out. Then I saw on the whiteboard that there was still some lamb offal left from the lamb I got for Christmas, and since there are very few ways I could sneak half a lamb heart and a liver into my family’s meals, they seemed perfect for sausage. I took from the freezer the lamb fat, heart and liver, along with some pork shoulder and liver, and a bag of corn cobs. Then I meticulously removed the items from the inventory whiteboard of course.

I left the meat items on the counter so they would thaw just a little bit, but not entirely as I wanted them firm to grind. I put the corn cobs into a pot of simmering water to make broth as I had this spring dinner vision in my head. I also stuck the KitchenAid grinder attachment and bowl in the freezer to chill. A couple of hours later I had this bowl of meat, fat and offal. 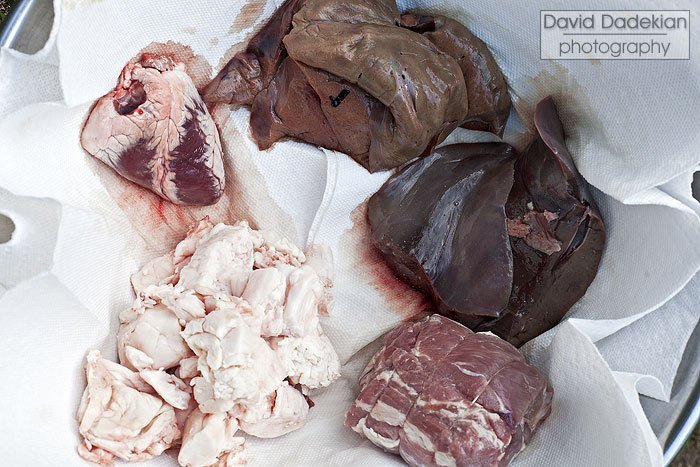 The corn broth had developed nicely so I added a couple of pounds of diced potatoes and some salt and went back to my sausage making. First up, merguez with the lamb heart, liver and fat. I had about 500 grams of heart and liver so I created a quick ratio to the amount of meat called for in the Charcuterie recipe and figured out the amount of fat and other ingredients I needed. Then I began grinding. Here’s where I first realized this might not be the best idea I’ve ever had. Everything ground up fine, I mixed in all the herbs, spices and wine and it certainly smelled like the same merguez I’ve made before. But it didn’t look right. The liver and heart were just too soft and I shouldn’t have thought to treat them like meat. As I tweeted to my friend Janis, the end result looked like an “unattractive meat slurry.”

Not to be deterred I heated up a saute pan, sprayed on a little non-stick cooking spray, took out a #20 disher and dropped two scoops of the liquid sausage into the pan. Kind of like meat pancakes. I cooked them for a few minutes on each side, and while the end result still looked kind of unappealing, it tasted exactly like good, spicy lamb sausage. I made the rest of my merguez-cakes before moving on to the chorizo. The pork ground up much tighter and behaved more like ground meat because of the shoulder. Also the pork liver was a lot more dense and meatier than the lamb liver. I added in the rest of the lamb fat too for texture.

Grinding away, the blurred shapes are arm movement during the long exposure

So maybe things had gone awry, but I was back on track and having fun grinding. It was then that I realized how much time had passed, dinner wasn’t ready yet, my wife Brenda was hungry and also a little curious about the amount of blood and meaty substance that now covered a lot of our kitchen counter. She was also a tiny bit concerned about the fact that I had prepared sausage for dinner out of a bowl that looked like it had meat batter in it. So instead of taking the time to stuff the chorizo into casings, I whipped in the herbs, spices and liquid, turned the whole thing out onto a huge sheet of parchment paper, rolled it up tight into a 4″ diameter tube, placed it on a sheet pan and stuck it in the freezer. The next day I quickly sliced the chorizo tube into 1/2″ rounds and put those into bags in the freezer, keeping one out to fry up and make sure it tasted like chorizo, which it did.

So I completed the May challenge with two sausages that tasted great. The chorizo I’ll use in all kinds of dishes, maybe even frying up a slice for a quick snack or putting a round on the grill during the summer. The merguez? That went into our late dinner which was: Corn Broth with Potatoes and Freshly Sliced Schartner Farm Asparagus, Accompanied by Floating Rounds of Merguez.

Lawyer-poet John Godfrey Saxe said, “Laws, like sausages, cease to inspire respect in proportion as we know how they are made.” I’m sure there are hundreds of Charcutepalooza posts out today that disprove that quote. Thanks again to Cathy Barrow and Kim Foster. This month you inspired and challenged me.