Last November nine of Rhode Island’s top bartenders gathered at The Eddy in Providence, along with a crowd of many more bartenders, four judges and a lot of Bols Genever, to compete for a trip to Tampa to celebrate Repeal Day. Because of the Repeal Day prize the cocktails created were to all be Prohibition-era inspired.

The competing bartenders are all members of the Rhode Island chapter of the United States Bartenders’ Guild and it was certainly a friendly fight to see who created the best cocktail. Second place went to Vito Lantz of The Dorrance for his tobacco laced cocktail “The Nick.” The winner was The Eddy’s own Carlos Garcia with “A Bolswork Orange” also known as “Goddamn, Amsterdam” at The Eddy. 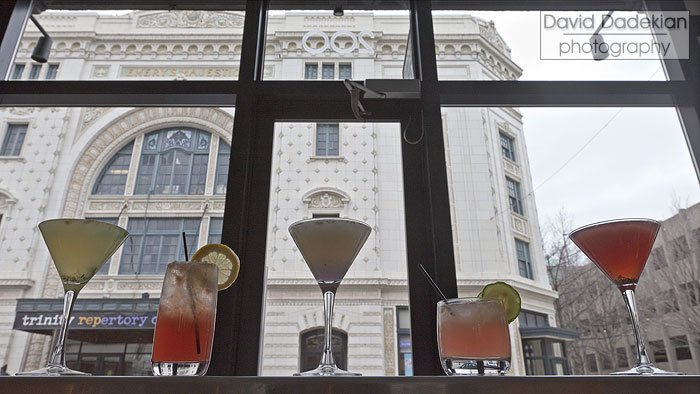 The new Spring Cocktails at Tini, from left to right: (verb) my Green Bikini in (place), A Classy (noun), (noun) on the Horizon, (verb) the White Dog, Make Her (verb) This Time

After this winter, it seems as if everyone is working hard to bring about spring. When I asked bartender Alicia Canning about working on the five new drinks for Tini‘s Spring Cocktail Line she gave kind of a sly smile. I’ll just say bringing about spring at Tini can be intoxicating and leave it at that. It can also be delicious, as proven by Chef Darius Salko’s two new dishes. When I received Salko’s message mentioning a fried chicken skin sandwich you could almost see the swooshing, curly speed lines behind me as I rushed to Tini.

First, the food. In addition to the fried chicken skin sandwich, which is more properly called The Crackling Club, there is the Orange Dream Salad. I’ll confess, when Salko told me what was in it—orange and grapefruit segments, dates, Bulgarian sheep’s milk Feta cheese, red seedless grapes, torn mint, cinnamon and pomegranate seeds—I wasn’t sure how that combination would work. But I’ve learned to have faith in Salko’s method of putting together good, fresh ingredients in clean, simple ways that create hugely flavorful dishes. Salko told me, “We serve it with two tortillas and you kind of just have a ball,” and he was so right. I highly recommend ordering the Orange Dream Salad, especially if you’re going to also have The Crackling Club, which as you might imagine, is so good (and only a little bit “bad”).

The Crackling Club (larger version at end of piece)

While you might think a fried chicken skin sandwich sounds hedonistic, again, in the Tini style of fresh and simple, it’s really a somewhat light sandwich. I say somewhat because it is a club sandwich, so there’s also house cured & smoked bacon, Allen Farms red mustard greens, sweet cabbage, pickled shallots, bread-and-butter pickles and house made mayonnaise, along with the two chicken cracklings. It’s all piled beautifully on their house made brioche. The chicken skin is perfectly crisped and slightly puffed so the effect is really a somewhat light spring-like club sandwich and not something heavy.

Now, the cocktails. Canning prepared five beautiful drinks for me to play with making photos of, and then of course I got to try them all. The Spring Cocktail Line is called “Ad Lib” and the names of the drinks require the person ordering to fill in some key words, in the style of a favorite childhood written word game. Sure the missing spots in the cocktail names could all be filled-in with words loaded in innuendo, but then who didn’t do that with Mad Libs anyway (0r skipped the innuendo altogether and just went straight to the gutter)? The cocktails are:

I really enjoyed the “[verb] the White Dog.” It uses Death’s Door White Whisky which is fermented in stainless steel and finished in uncharred oak barrels so it never gets the caramel color or smoky flavors of a traditional whisky. Personally, I wouldn’t call it a whisky, or maybe label it with an asterisk, because it’s a delicious drink and people who aren’t fans of whisky might pass it by. The “Make Her [verb] This Time” was also a favorite. The thyme and a little touch of salt in it really brings out some subtle flavors. All the drinks were perfectly balanced and should be big hits.

In addition to the new drinks and dishes, Tini is now serving late on Wednesdays with live music. Salko posted, “It’s the Tini Show starting at 10 p.m.! 3 excellent musicians, amazing cocktails, $15 wine bottles, late night grub until 11 p.m. You can’t go wrong! Tini Weenies and Fries will be served for the Music Lovers!” 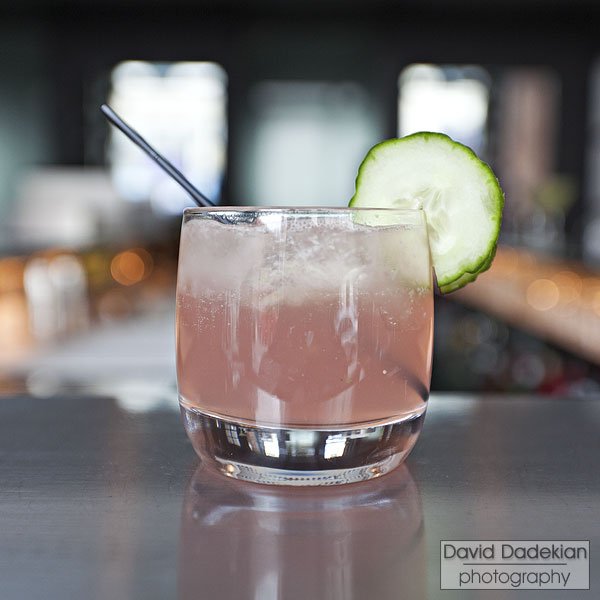 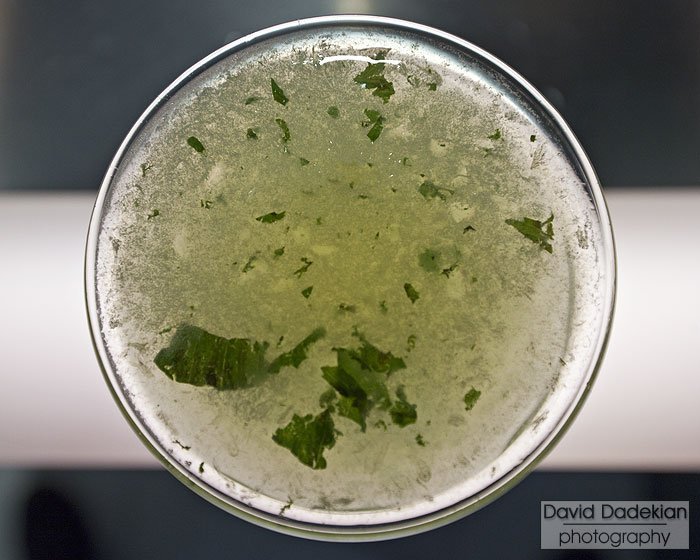 (verb) my Green Bikini in (place) 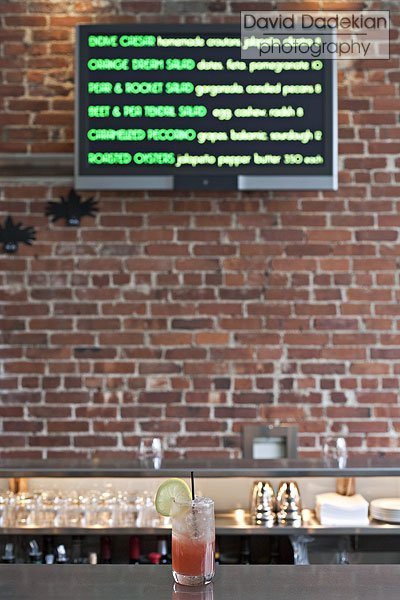 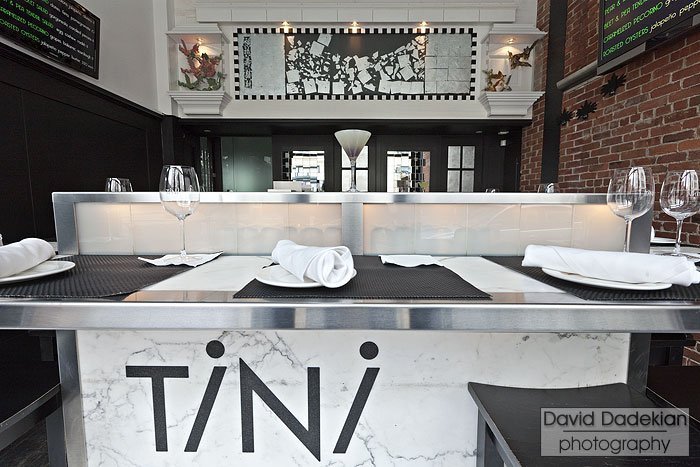 (noun) on the Horizon 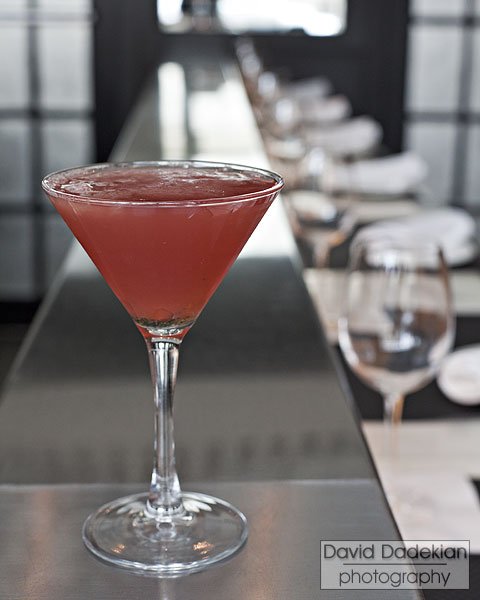 Make Her (verb) This Time 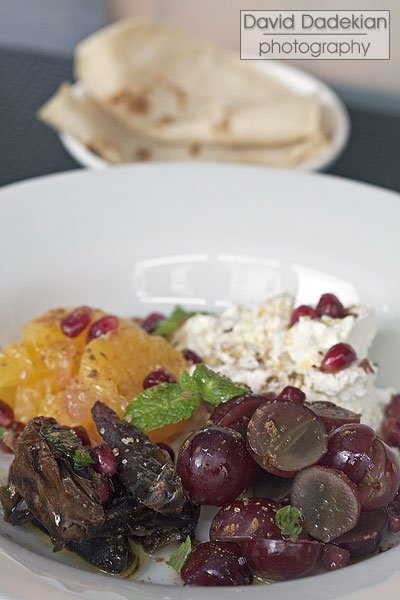 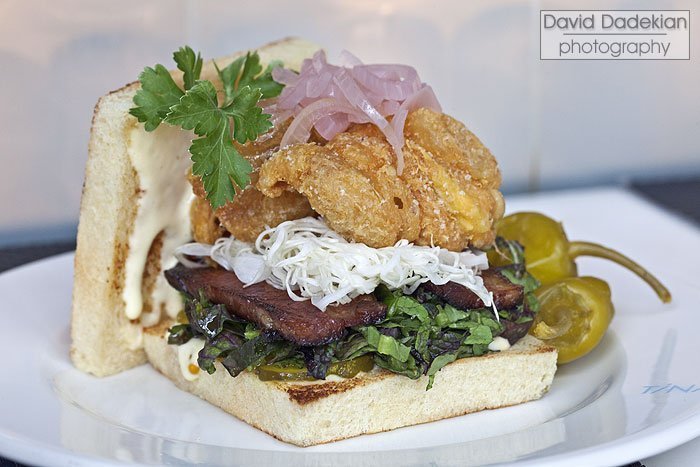