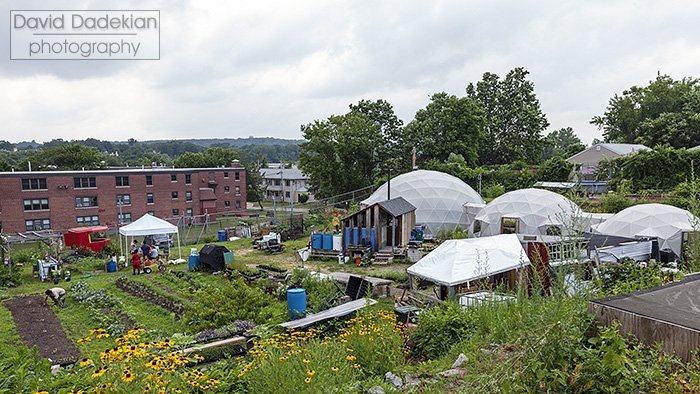 New Urban Farmers in Pawtucket Closes in on Fifth Anniversary

While walking me through one of the geodesic dome greenhouses at New Urban Farmers in Pawtucket, Bleu Grijalva stopped to look at a stray tomato plant that was growing up the side of a table. “Sometimes when we accidentally drop a seed on the ground, it will grow on its own,” Grijalva said. “I like to let them grow there. It serves as a good reminder that no matter how many hours and sweat we put into growing food and making perfect rows of plants, the food wants to grow on it’s own, and maybe that’s what we need to do sometimes—just go with the flow. Grow where we fall.” That is just one of the life lessons that can be pulled from farm work, and the team at New Urban Farmers have found the perfect audience for these lessons.

Originally started with the intention of becoming a local farm and community garden, the small plot of land situated behind a housing project near the Pawtucket/Central Falls border, has evolved into a “living classroom” for the 500+ children who live here. While the responsibility of watching over children can certainly add to the farm work—especially when they’re being mischievous, as all children are—it’s nothing short of inspiring to see that there is a group of people here to provide these kids with some guidance and structure that they may not have at home. It’s even more inspiring to see that these kids, who could be on the couch watching television or on the streets getting into some very negative situations, are choosing to come to the farm instead.

Closing in on their five-year anniversary, New Urban Farmers now has four locations throughout Rhode Island and southern Massachusetts, all utilizing sustainable growing techniques. When Grijalva walked us past a table with growing plants, one of the kids with us grabbed a fistful of fish food and threw it under the table into a tank of water. Immediately, as the pebbles of food touched the surface of the water, the tank erupted into a tumult of frenzied fish, all racing to grab the first bits. “This is our aquaponics system. It holds over one thousand tilapia,” said Grijalva. Aquaponics is a mix of aquaculture and hydroponics, in which the waste from a fish tank is converted to nitrates by bacteria and is used to feed plants. The plants clean the water, which is then cycled back into the fish tank, creating a sustainable fish farm and vegetable garden.

Along one of the edges of the fenced-in farm, is a row of community garden plots. Although there were some less-than-perfect looking garden plots, it was obvious that some of the gardeners had developed green thumbs, and were learning to grow everything from flowers to vegetables. While they sell most of the plots, they also give some to the older residents in the housing project who are interested in gardening. “We provide then with the seeds and the know-how,” said Grijalva. “It’s really nice to see that some of these people who might not have jobs, or a whole lot of accomplishments, now have something to be proud of. But we’re still looking to find that perfect balance between doing good in the community and making enough money to keep doing good.”

Although the farm has become a classroom for so many, there is no set curriculum. Grijalva emphasized that as we finished our tour. “There are no textbooks here,” he said as he took a bite of a fresh tomato, just picked from another stray plant growing out of a pile of fertilizer. “We just try to teach the kids whatever lessons can be taken from what’s happening in the garden.”

Scroll down for more photos from New Urban Farmers.