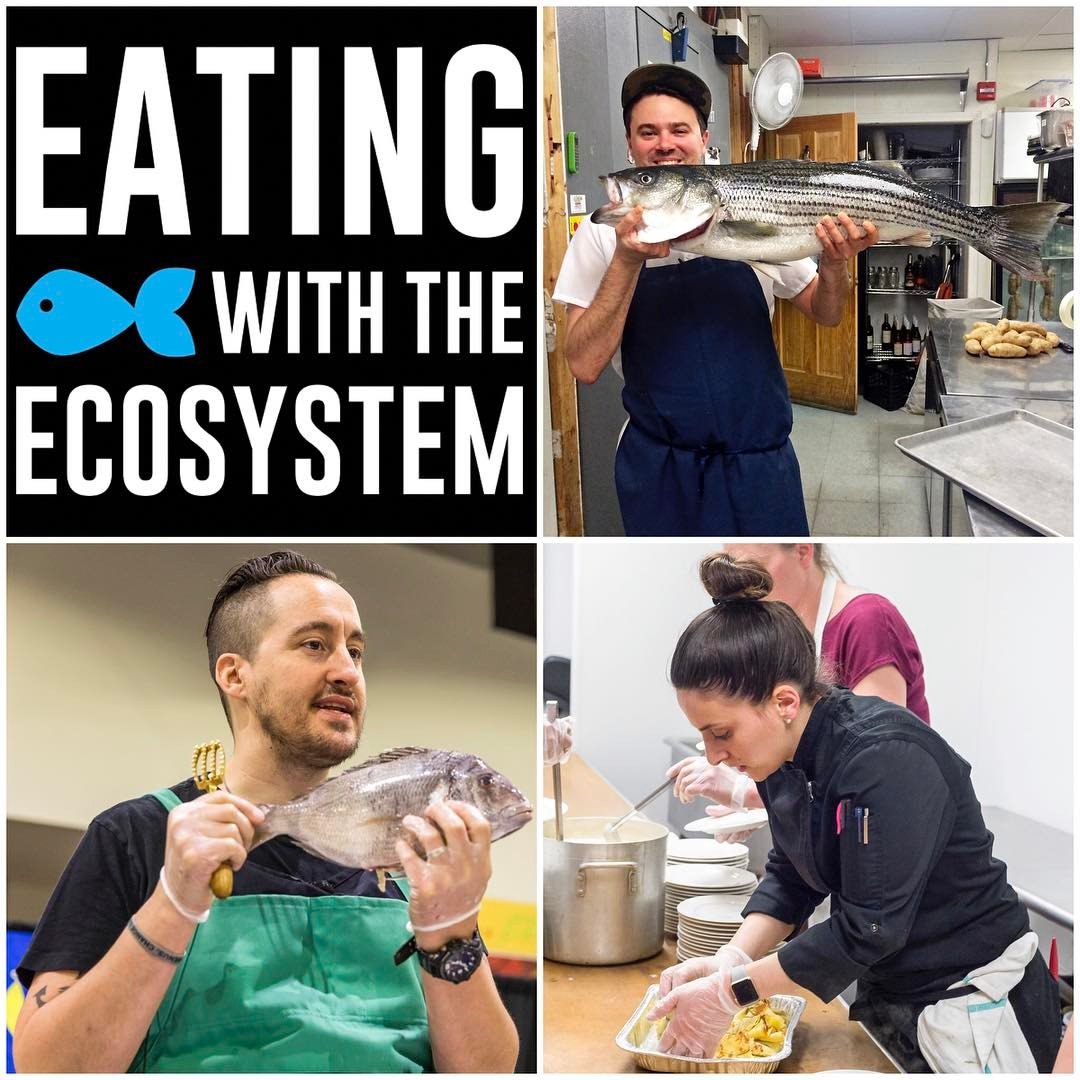 Eating with the Ecosystem is partnering with Eat Drink RI to present a series of educational dinners at local restaurants to promote their mission of creating a place based approach to sustaining New England’s wild seafood. These upscale, seasonal dinners will be fundraisers for their Scales & Tales Mobile Food Boat program.

The Scales & Tales Mobile Food Boat is a skiff (a shallow, flat-bottomed open boat) that the team is converting into a mobile education platform, complete with a cooking demo station. Eating with the Ecosystem plans to run free, educational events at farmer’s markets and other public locations showcasing the Food Boat. The goal of these programs is to educate consumers about our local seafood, fisheries, and ecosystems.

The “Scales” part of the dinner series relates to the meal, where guests will enjoy a multi-course experience, paired with wine, beer, or cocktails. The menu will consist of seasonal and abundant local seafood produced by our marine ecosystems. The “Tales” portion of the evening is an education component, with fishermen and scientists sharing stories and digging deeper into Eating with the Ecosystem’s mission in relation to the marine species being served.

Each dinner is $90 per guest, all inclusive, and begins at 6pm with a welcome cocktail reception, followed by a multi-course seated dinner with drinks. To purchase tickets, please visit www.eatdrinkri.com/scalesandtales. 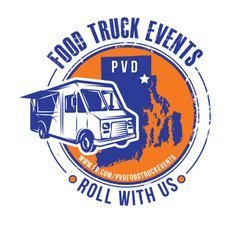 Coming on the heels of a wildly successful 2016 season, PVD Food Truck events has released its 2017 calendar of food events and invites the community to “Come Roll With Us.”  [FoodTrucksIn.com is the national food truck search engine based in Rhode Island.  PVD Food Truck events is its local event planning division.]  Together these brands continue to develop local events throughout the state.  They kick off a robust season of more and new community food events with the first event taking place on April 21st from to 5pm to 8pm with a spring break food truck pop-up event at the Roger Williams Park Carousel Village in Providence.

The month of May brings the return of popular events.  On the first Thursday of every month, food trucks will roll in to various Warwick locations. Warwick food truck night begins on May 4th from 5pm to 8pm at Norwood Library, 328 Pawtuxet Ave.  On May 18th and the third Thursday of every month, food trucks return to Warwick City Hall from 5pm to 8pm.  As Warwick events sometimes alternate locations throughout the city please refer to the website for the most up to date location information.

A new stop on the map for PVD Food Truck events includes Woonsocket City Hall’s Market Square Food Truck night’s taking place on May 12 from 5pm to 8pm and then the 1st Friday of the month.

Providence City Hall is the next stop on PVD Food Truck events series with a May 25th return to City Hall.  Food will be served up from 4:30 on and take place every 4th Thursday of the month.

“We are excited to work with Rhode Island’s best local food truck purveyors and will also introduce you to some new and exciting mobile food trucks and cuisines for the 2017 season,” said Eric Weiner, President of FoodTrucksIn.com.  “We have put together a robust calendar of food events that intends to draw individuals together for a shared experience of food, conversation and community.”

A number of food trucks with varying cuisines will be present at each event.  Selections may include barbecue, Asian, taco, grilled cheese and French fry, dessert trucks, gourmet, vegetarian, coffee themed trucks and more.  Select events will also include live entertainment and sale of beer and wine for guests age 21 and over.

Additional food truck events are being planned for later in the summer at Central Falls monthly salsa nights and Cranston’s Mulligan’s Island Full Moon Saturday night events.  A schedule of those events will be released later in the season

PVD Food Truck Events were created in an effort to use food trucks to bring the community together.  Since its inception in spring of 2015, these gatherings have become a weekly occurrence, attracting visitors of all ages to these mobile food events taking place across the state.  There are more than 75 independent food truck vendors serving the Rhode Island community.

When Jane and Dom first visited Evelyn’s in 1987, Ronald Reagan was president, The Simpsons had just debuted, and the gas that the young couple put in their car for a trip out to the Cape was just 89 cents a gallon. “We took a wrong turn and stopped for lunch, and heard the owner say the restaurant was for sale,” Jane remembers. That happy accident soon led to the young, ambitious couple purchasing Evelyn’s from its namesake founder, who gave the Bittos her recipes and helped them take over the operation of the restaurant in July, 1987.

A lot has changed over the years, and not just gas prices. The Bittos has three children while juggling shifts; all three would eventually work alongside the hundreds of employees who have joined the Evelyn’s family over the years. “We love our staff and they love us back,” says Jane.

Not even a devastating fire in July of 2005 could slow the Bittos down: Evelyn’s came back strong the following year with a newly expanded dining room, thanks in part to local friends and fans who helped raise money for the renovations. That generosity reflected the restaurant’s strong roots in the local community, which includes the Bittos’ founding and sponsorship of the annual Singing Out Against Hunger concerts at Evelyn’s.

Over the years, Evelyn’s has grown from its roots as a simple seafood shack to a full-service restaurant offering a mix of classics like fried clams and fish & chips to serving seven different salads, their famous lobster chow mien (a mashup of two New England favorites lauded by celebrity chef Guy Fieri on Diners, Drive-Ins, and Dives), and a menu of creative cocktails. In addition to an indoor dining room and picnic-table pavilion for takeout, Evelyn’s also added a waterfront patio right next to the restaurant’s dock, a popular stop for boaters cruising Mount Hope Bay and the East Passage of Narragansett Bay.

For the 2017 season, Evelyn’s is celebrating 30 years with a variety of weekly specials all summer, including $10.99 fish and chips on Mondays, $5 chowder and clam cakes Monday to Thursday, and $30 dinners for two on Wednesdays. The 30th anniversary dinner special includes clam cakes, a glass of beer or wine, and favorites like fish & chips, crab cakes, clam strips, grilled chicken, Mediterranean calamari salad, and beef, shrimp, or chicken chow mien.

The 2017 Singing Out Against Hunger Concerts will be held on three Fridays this summer: July 14, Aug. 11, and Sept. 8. All shows start at 5 p.m.; admission is free. Performers TBA.

For the 25th year, members of National Association of Letter Carrier collected bags of healthy, non-perishable food items left at mailboxes by postal customers. In addition to the 60,000 pounds delivered to the Food Bank, many local pantries received thousands of pounds of food directly from nearby post offices increasing the total amount of food collected.

“We are so thankful to the letter carriers and postal customers who teamed up to collect tens of thousands of pounds of food for Rhode Islanders in need of food assistance – all in one day!” said Andrew Schiff, Chief Executive Officer of the Food Bank. “This food drive is critical to our ability to feed children and families through the spring and into the summer.”