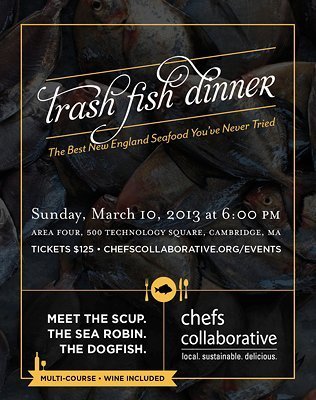 The following is a media release from Chefs Collaborative regarding their upcoming Trash Fish Dinner. Two of the chefs from the Rhode Island network, Jake Rojas of Tallulah on Thames and Derek Wagner of Nick’s on Broadway, are participating, along with a group of some of New England’s best. Tickets are now available for this multi-course New England seafood dinner. Purchase them at www.chefscollaborative.org/events/trash-fish-dinner.

The dinner was conceived of, and is being led by, by eight New England chefs from the Boston area, Rhode Island, and New Hampshire. The dinner will feature lesser-known Atlantic fish species, including species such as the sea robin, dogfish, and hake. These fish have traditionally been left off the menu by chefs, are often discarded by fishermen as bycatch, and are virtually unknown to the general public.

Included in the evening is also a special short talk about the future of sustainable seafood from Barton Seaver, Sustainability Fellow in Residence at the New England Aquarium and National Geographic Society Fellow.

With the recent news about the near collapse of New England groundfish fisheries, the Trash Fish Dinner is well timed. Chefs Collaborative Executive Director Melissa Kogut remarked that “the overfishing of popular species such as cod and other groundfish has reached a critical tipping point in New England. With Chefs Collaborative’s Trash Fish Dinner, we hope to open up a conversation about the need to develop new fishing methods and target new species.”

The chefs involved with the Dinner are also on a mission to change public perception of these so-called “trash fish” – for the sake of the environment, fishermen, and continued innovation in this industry. 606 Congress Executive Chef Rich Garcia commented, “if one thing should be on the red list, the fishermen should be . . . we’ve just been so used to what’s always been sold, but we’ve got this abundance of fish with amazing textures and flavors.”

UPDATE: Chefs Collaborative Board Chair Chef Michael Leviton, host of the Trash Fish Dinner at his restaurant Area Four, has written an editorial piece “Are Trash Fish the Answer?” for The Huffington Post. Chef Rich Garcia of 606 Congress, also a Trash Fish Dinner participant wrote a post on his site, “Trash Fish to Cash Fish,” about his experience in Washington D.C. with the Massachusetts Congressional delegation during the Environmental Defense Fund National Outreach Day.