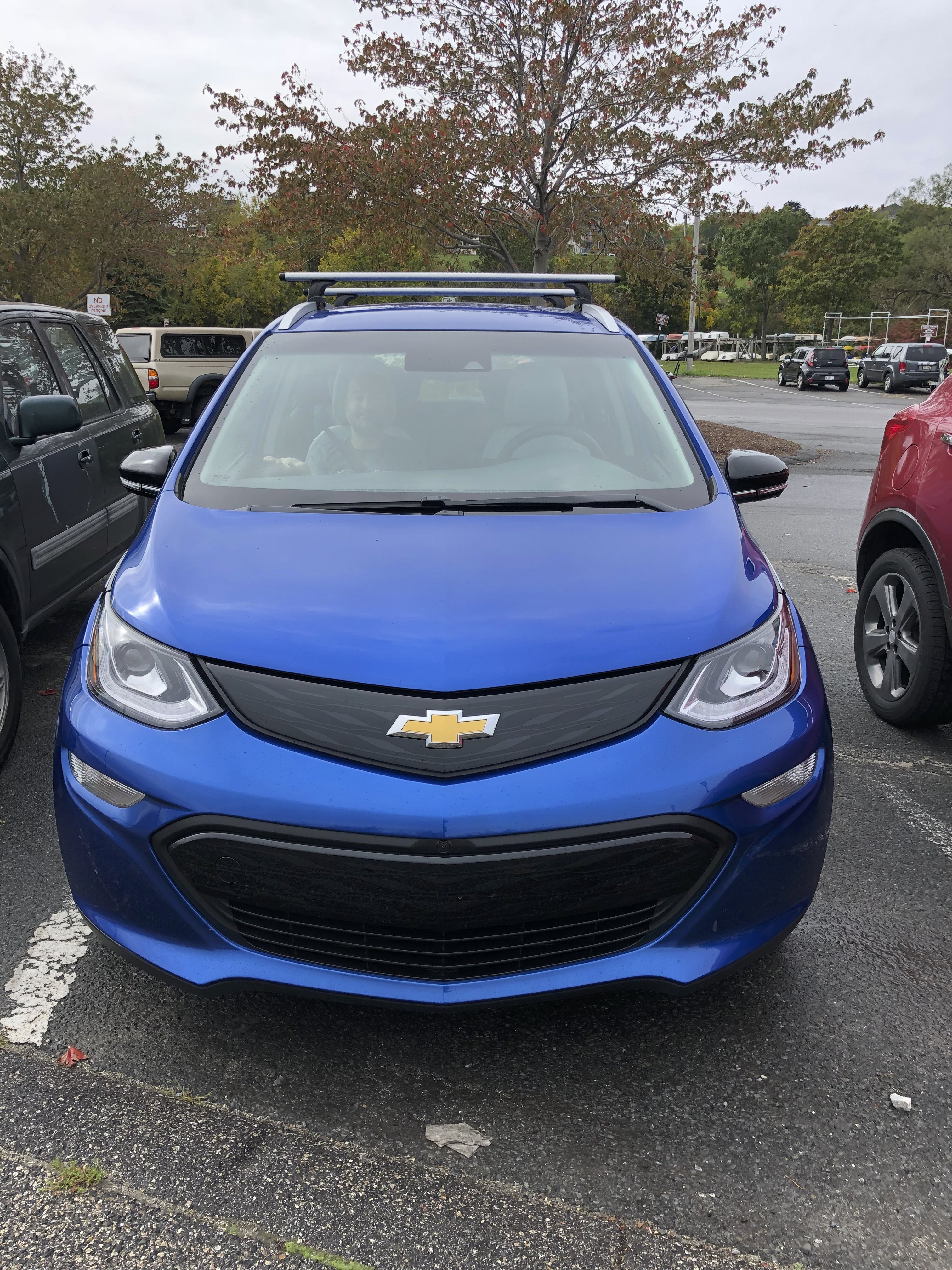 To Portland, Maine in a Chevrolet Bolt EV

Back in October, Chevrolet asked if I’d like to take their latest all-electric vehicle, the Bolt EV, on a long weekend road trip in New England. Some people might hear October drive in New England and think autumn foliage, but you’re not reading Leaf Peep RI. No, this was a road trip to try some new great food & drink, and since the 45 minutes it would take to travel anywhere in Rhode Island can’t really be considered a road trip, I loaded up the family and we drove north to Portland, Maine.

But first, we had to swap our car for the Bolt EV and get a quick lesson in driving an electric car. Let me say up front, I’m not a car guy. I get that they’re necessary to get around here, but in my day-to-day driving all I really care about is the sound system, interior features and fuel efficiency—so truthfully I was happy with the Bolt EV right away. It came with Apple CarPlay in a Bose system, built-in 4G WiFI and plenty of USB ports around the car, plus a wireless charger and all kinds of climate controls. My wife Brenda does almost all the driving, so I’ll put her car thoughts later in this piece.

But first, fully charged so we could drive for at least 238 miles, we crossed the Maine border and stopped for food. We were barely into Maine when we exited I-95 and backtracked a little to Badgers Island and some of the best BBQ I’ve had up north at Ore Nell’s Barbecue in Kittery. Do you know how good the barbecue is at Ore Nell’s? So good that I know I posted some photos to my Instagram story, but that was it because I was so distracted by the food and drink. GO. I’m not trying to be hyperbolic. This is only one paragraph in a story about a Chevrolet Bolt EV trip, but it’s a paragraph you should pay attention to if you want great BBQ.

Onto Portland and the Courtyard Marriott on Commercial Street which has several electric vehicle charging stations. The valet at the Marriott wasn’t familiar with the Bolt EV, but with some quick skill had it plugged in for an overnight charge for us. In case you’re wondering, there are charging stations all over Portland, in fact, all over everywhere as I soon learned by installing an app called PlugShare which maps charging stations, free and otherwise on your phone for you. In a city like Portland or Providence, or even Cranston and Warwick, these things are more common than gas stations. While I’m on a the subject of apps, there is a myChevrolet app that allows some remote control of the Bolt EV, even when you’re not near it. You can “start and shut down your vehicle, lock and unlock your doors, active your car’s horn and lights, send parking reminders and more.” You cannot, however, drive it like a remote vehicle in an action movie. Hopefully that’s a future upgrade.

Back to the food, and what a full Saturday of eating we had. My family and I really enjoyed Portland a lot. There’s really something for everyone and we started with the girls’s desire for donuts for breakfast. The Holy Donut makes Maine potato donuts and, as you might imagine in our donut-crazed world, there’s a line to get in, at least at the Exchange Street location that was near our hotel. After we all shared several donuts and walked around shopping, the girls wanted French fries from Duckfat for lunch. Perhaps we’ll just stick to a diet of fried carbs for the day? Who am I to blow against the wind? However, I spoiled the all-day fried carbs diet with a detour into distilled carbs with a visit to Hardshore Distilling Company and their excellent gin and then a stop at Maine Craft Distilling where I sampled a number of their spirits.

Next, we went back to the hotel to take the Bolt EV out for a little spin west of downtown Portland to Thompson’s Point, where I did a wine tasting at the Cellardoor Winery and then walked next door to the Stroudwater Distillery for another tasting. When I walked backed outside Brenda was standing outside the car talking to two men. I wasn’t sure what was up. Come to find out they were in the winery also having a tasting, came outside, saw the Bolt EV and started to ask Brenda a bunch of questions about the car. You can’t make this stuff up.

At this point we were in need of some dinner and our next stop was Eventide Oyster Co. To be honest, I had pretty high expectations for dining at Eventide and at the same time I wasn’t sure if a seafood restaurant, even one as highly regarded and awarded as Eventide, would wow me, coming from the Ocean State and some of the best seafood around. Eventide blew me away. The oyster accoutrements were excellent, even though I tend to like my raw oysters unadorned. The New England Clam Chowder was some of the best I’ve ever tasted, all the way down to the homemade cracker. The Maine Lobster Stew with maitake mushrooms, coconut and green curry was a genius combination of strong flavors that worked so well together without overwhelming each other. We kept ordering more because everything was so good—Roasted Brussels Sprouts and Fried Oysters—and then came what was quite possibly the best lobster roll I’ve ever had. The Eventide Brown Butter Lobster Roll definitely exceeded my high expectations and I’m not sure describing it in words is even of value other than to say you should go eat one. We ended the meal with some fun and delicious ice cream sandwiches which they very nicely cut into quarters for our family. Suffice it to say, to me Eventide Oyster Co. is worth every accolade it’s received and I wouldn’t hesitate to eat there again.

Sunday morning we made a quick stop at Standard Baking Co. because everyone I know who’s been says they make some of the best bread around (it was), and then we walked over to Central Provisions for brunch and again ordered more dishes than we should have, but it’s hard not to when you see these menus. Beginning with a Kimchi Bloody Mary for me, we got a couple of orders of Bread and Butter and North Country Bacon, followed by Boquerones, Apple Fritters, Skillet Corn Bread, Bone Marrow Toast and a Roasted Mushroom special. That was one special brunch, everything was prepared so well from the bacon or the simple fritter to the corn bread and the butters. Sometimes you don’t need a highly composed dish when you can have some really excellent ingredients skillfully prepared and presented. Then, in very typical Rhode Island style, even though we were in Maine, as we were leaving Central Provisions in walked a couple of friends from Rhode Island. Ah, the biggest little state in the union!

It began to rain so we decided to take a Sunday drive in the Bolt EV and see some of the Portland sights. First we headed Fort Allen Park and the Eastern Promenade and then we went out to Cape Elizabeth to see the Cape Elizabeth Lighthouse and look out across the Atlantic. Here’s where we really got to play with some of the city driving features of the Bolt EV. As I mentioned, Brenda loves to do the driving and she got a chance to use the One Pedal Driving and Regen on Demand features of the car, almost playing the car like a game to see how well she could capture and store some of the energy from the car moving to maintain a better battery life. I got a kick out of the surround vision feature where you can get an overhead view of the car so you can see all the way around you. That’s definitely a step up from the standard rear view camera.

We took the car back to the hotel for a recharge, though we barely used any battery up tooling around Portland and Cape Elizabeth, and walked over to Vena’s Fizz House for some cocktails and housemade sodas for the girls. I asked them what was their favorite feature of the Bolt EV so far and they unanimously said the built-in WiFi so they could watch Netflix on their iPads on the drive from Boston to Portland. Priorities! After drinks we had dinner reservations at a newer restaurant, Lio, where we had an excellent Sunday dinner special of fried chicken paired with selections from their wonderfully extensive and interesting wine list.

Monday morning and our trip was almost at an end, but not before we weren’t treated to a Maine lobstering tour with Lucky Catch Cruises as part of our trip from Chevrolet. We had nice enough weather that it wasn’t too chilly out on the water and everyone had a great time. The girls had an absolute blast pulling up a lobster trap and pulling out stowaway crabs. While it was a complimentary tour for us, I would gladly recommend it and the staff of Lucky Catch to people interested. Lobstering is extraordinarily tough work with a lot of important regulations that need to be followed to maintain the population. I was glad we had a chance to experience it, even if briefly on a tour.

Last stop in Portland was lunch at Slab Sicilian Street Food where we got slices of square pizza bigger than our heads! By this point Portland had really stuffed us and it was time to head back home. I drove for a bit on Interstate 95 to get a feel for highway driving and the Bolt EV certainly had this non-car-lover impressed. I haven’t even mentioned how there was plenty of room for the girls in their booster seats and the mystifying amount of things kids bring on road trips in the back seat, and we had no issues with fitting luggage for the four of us in the trunk. All-in-all the Bolt EV made for a very comfortable and easy road trip.

Thank you to Chevrolet for the Bolt EV loan, hotel stay and lobster boat tour. You can learn more about the Bolt EV here.

Click any image below to open a gallery of all the photos: