From Discover Newport comes the news of the next Newport Restaurant Week. As has become the tradition in the area, Restaurant Week has grown to over a week, running for ten days beginning Friday, November 2. All the information, including the complete list of participating restaurants can be found in the release below and at GoNewportRestaurantWeek.com.

Newport Restaurant Week returns November 2-11, 2012 with more than 45 participating restaurants throughout Newport and Bristol Counties, Rhode Island. Now a highly anticipated fall tradition, restaurants dish up extraordinary cuisine at affordable prix fixe prices with ingredients sourced from local farmers, foragers and fisherman. As in years past, the prices remain at $16 for a three-course lunch and $30 for a three-course dinner.*

Newport Restaurant Week has come to be a crowd-pleasing event among local residents and visitors alike since being introduced in 2006. This fall’s 10-day affair will highlight local food purveyors, new seasonal menu items and the talents of creative chefs who orchestrate unforgettable dining experiences. Visiting gourmands can come for dinner and stay for breakfast by taking advantage of reasonably priced Newport Restaurant Week lodging packages while culinary enthusiasts can savor food-related events including cooking classes, Greenvale Vineyards‘ Harvest Festival and the Taste of Newport—a savory extravaganza benefiting Child & Family, the largest and most comprehensive social service provider in Newport County. Information on packages and the growing list of events can be found at GoNewportRestaurantWeek.com.

Updates on events, participating restaurants and menus can be found via our social networks, including Newport Restaurant Week’s Facebook page and on Discover Newport’s Twitter feed (use hashtag #nptrw). Also, diners from Providence and around the state can rely on Rhode Island Public Transit Authority (RIPTA) bus routes for $4 per round trip ticket or $6 for an all-day pass to save money on parking and gas.

Participating restaurants span both counties, reaffirming the destination’s identity as a premier culinary destination. Chefs from Brick Alley Pub (Newport), Hourglass Brasserie (Bristol), Jamestown Fish (Jamestown), Scampi (Portsmouth), and Windward at the Hyatt Regency (Newport) will appear on The Rhode Show on WPRI TV 12 in advance of and during Newport Restaurant Week, each cooking up a dish that will be featured on their prix fixe menus.

For the first time ever, Newport Restaurant Week will be sponsored in part by OpenTable.com; a free, real-time online restaurant reservation program. Participating OpenTable restaurants have a reservation button on their individual listing on the GoNewportRestaurantWeek.com web site (along with their Restaurant Week menus) so that users can conveniently book a time to dine directly from the site. Additional sponsors include Absolut Vodka, American Express, Brancott Wines, the East Bay Chamber of Commerce, the Newport County Chamber of Commerce, Samuel Adams and Yelp.com.

*Prices are for prix-fixe menus only. Tax, beverage and gratuity not included. Other restrictions may apply.

Have you visited Chez Pascal’s Wurst Window for lunch yet? 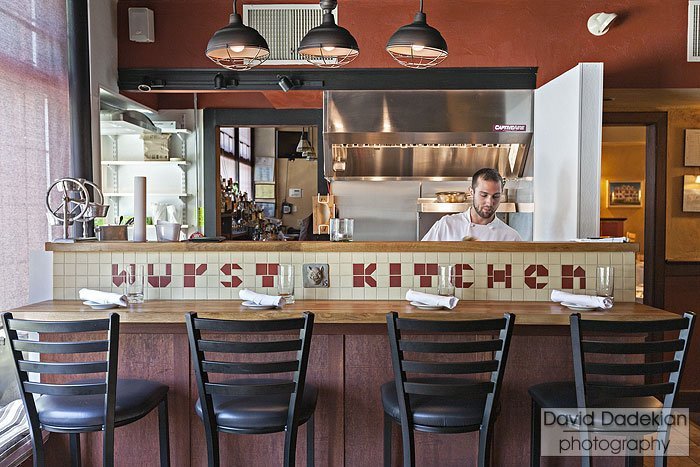 Sure it’s a cliche, but talk about turning lemons into lemonade. When a car crashed into the side of Chez Pascal over a year ago owners Kristin and Matt Gennuso decided to use the damage to their advantage and put in a take-out window. They already served fast fare that was take-out friendly from the Hewtin’s Dogs Mobile truck and a Hot Dog cart, so why not add some outdoor seating and serve it out of the restaurant as well? The Wurst Window, as it’s called, is now open and has already become a hit with those who’ve eaten there.

We spoke with Chef Matt Gennuso who described the menu as follows, “The Wurst Window will be focusing on the sausages. We’ll always have the hot dogs. There will be a sandwich of the day, and as we grow into it, the menu will grow. Start small, we do it right, build into it.” Don’t let Gennuso kid you though, Chez Pascal’s starting small is great. The window is open for lunch Tuesdays through Saturday, with outdoor seating, though that will grow to include indoor seating as well. Bar service includes beer and wine or a full bar when seated inside. As Gennuso said, it’s evolving but bottom line is: best sausage in town and beers available now at the Wurst Window.

Below are a few photos from the opening week of the Wurst Window. That week’s menu can be seen below, but as noted, it will change. Chez Pascal is at 960 Hope Street in Providence. 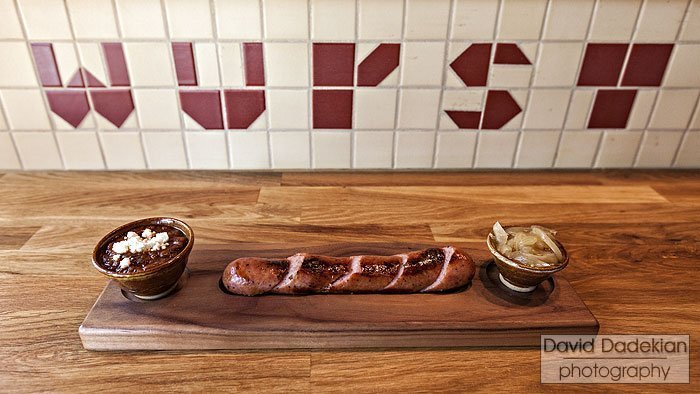 Knackwurst with Beer Onions and Feta & House Mustard. The wooden serving boards were made by Matt Gennuso’s father and the small ceramic condiment bowls were made by his mother. 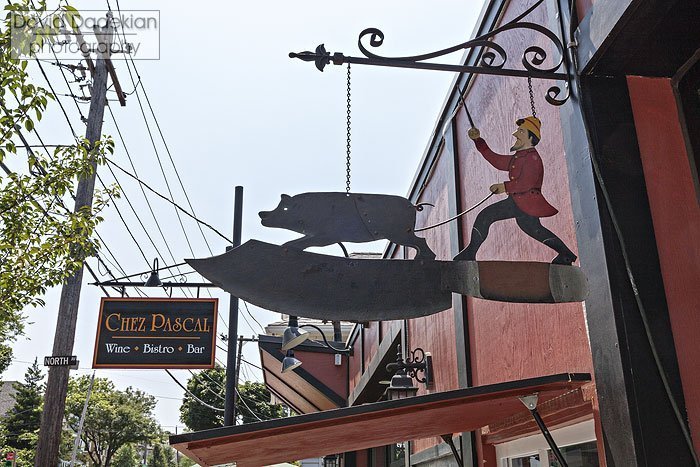 Sign hanging above the Wurst Window outside Chez Pascal 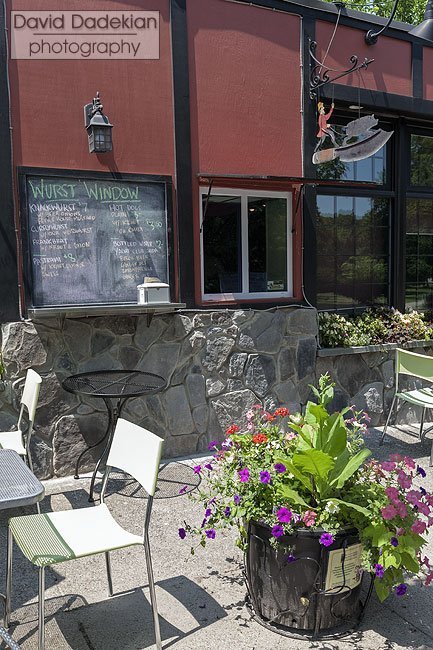 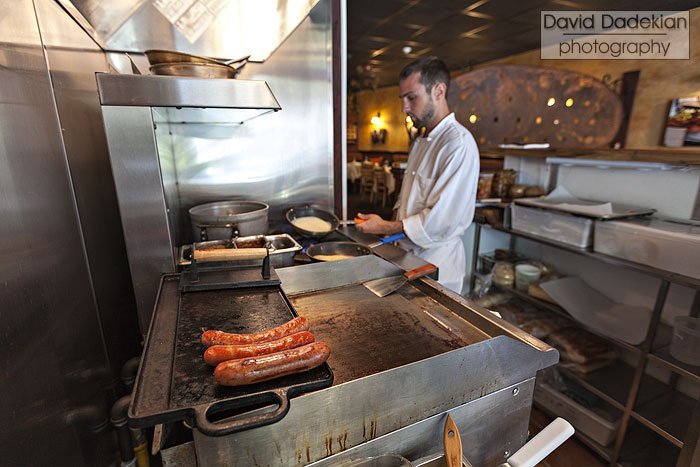 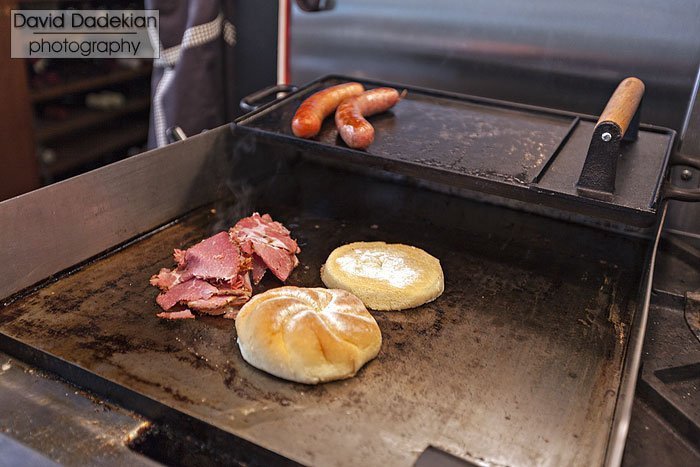 A couple of sausages and a pastrami sandwich on the flattop 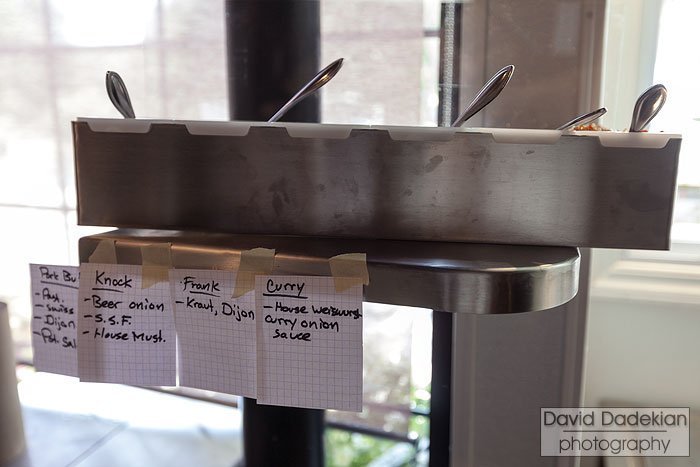 Condiments for each order 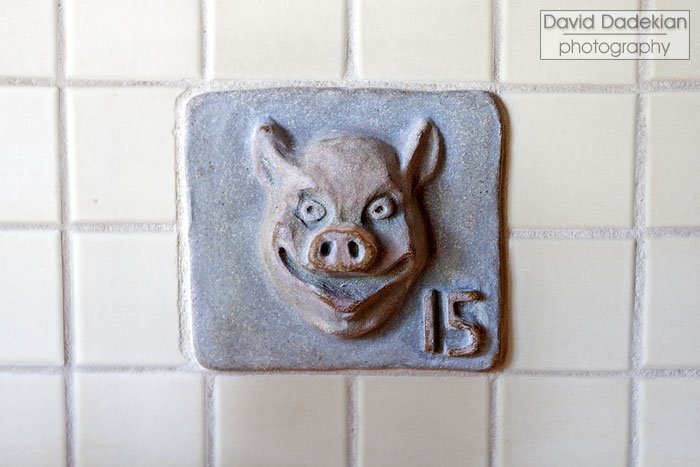 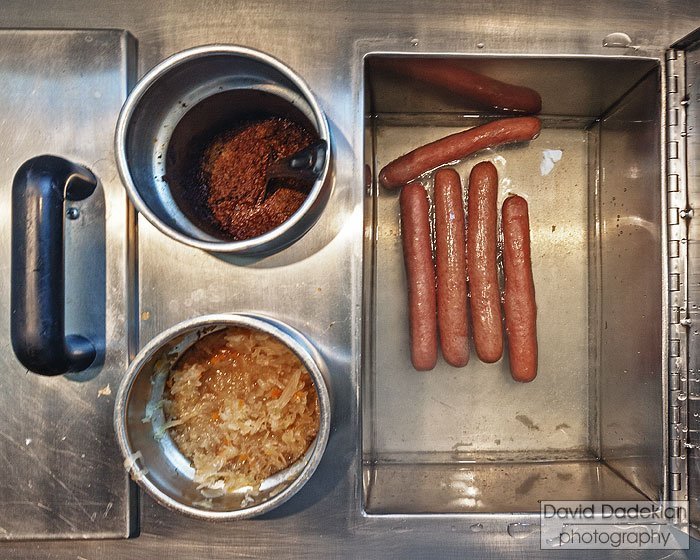 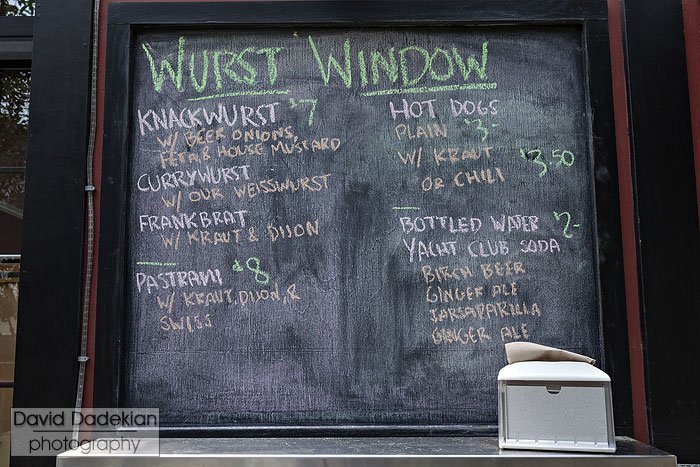 Providence has been no stranger to top rankings from the readers of Travel +  Leisure magazine, having been voted Number 2 in the country for overall dining, Number 2 for pizza, Number 5 for high-end cuisine and Number 7 for Microbrew Beer. So when the latest survey in their America’s Favorite Cities polls anointed Providence the Best Burger City in America, after coming in 3rd place in 2011, it didn’t seem too surprising. Then the Providence Warwick Convention & Visitors Bureau put together this great video and we knew that was something that needed to be shared. Take a look:

While on the topic of video, Avenue N American Kitchen‘s chef and co-owner Nick Rabar is also the host of Chef2Go on Cox Sports. Season three of the all-local food TV show has already begun airing and can be seen on the new Cox Sports/WJAR 10 network OSN, Ocean State Networks, which can be found on Cox Communications channel 5, and HD Channel 1005. Watch Chef2Go Mondays at 7 p.m., Tuesdays at 9:30 p.m. and Sundays at 9:30 p.m. Here’s a clip from a recent program:

Many of these same items are on the dinner menu, in addition to steamed mussels marinere, house- cured meats and cheese board, clams casino and beef carpaccio for starters. Pasta dishes include house-made ravioli, buccatini alla puttanesca, and fettucine carbonara.