Amica Insurance is teaming up once again with the Rhode Island Community Food Bank, United Way of Rhode Island and Crossroads Rhode Island for the Amica $75,000 Community Challenge. Amica will match donations from people or businesses, dollar for dollar, up to $25,000 per charity, until Monday, March 3. Visit this donation page to make a gift to the Food Bank that will be matched by Amica. Thanks for participating in the Challenge!

Today at the Fertile Underground Natural Cooperative, members of the medical and farming communities and concerned community members came together to encourage local action on a critical public health issue. Concerned residents and community leaders gathered to support the Providence City Council in anticipation of their vote to pass a local resolution in support of a federal ban on the misuse of antibiotics on factory farms.

The routine daily use of antibiotics on livestock, whether or not they are sick, is directly linked to the creation of antibiotic-resistant bacteria, which have become a serious human health threat. Federal legislation, the Preservation of Antibiotics for Medical Treatment Act (PAMTA) in the House and the Prevention of Antibiotic Resistance Act (PARA) in the Senate, would prevent medically important antibiotics from being used needlessly on healthy farm animals. Food & Water Watch and local residents are calling on City Council to pass a resolution calling on Rhode Island’s congressional delegation to support the bill.

“We need to make a stand to eliminate the practice of pumping our livestock full of drugs, simply because they’re raised in deplorable conditions, in order to make more money and make it faster,” said David Dadekian, President of Eat Drink RI and partner with Blackbird Farm in Smithfield, Rhode Island, in a statement. “Rhode Island has been a leader in growing and distributing local food. Let’s see it be a leader in raising healthier, antibiotic-free meat.”

“We are facing a major health crisis brought about by the widespread use of antibiotics on healthy animals on factory farms,” stated Dr. Sarah Davenport, a local pediatrician and active campaign volunteer. “Strains of bacteria that were once only present in high risk environments are now widespread in the community.”

“All of the major health institutions, including the American Medical Association and World Health Organization, agree that antibiotics are losing their effectiveness,” added Gus Fuguitt, Providence field organizer with Food and Water Watch. “We can’t afford to let agribusiness wipe out life-saving antibiotics for the rest of us.”

Currently, factory farms across the country routinely feed livestock low doses of antibiotics to compensate for filthy living conditions and unnaturally promote growth. The practice creates a breeding ground for antibiotic-resistant bacteria, which are responsible for two million human infections and 23,000 deaths annually, according to a study released by the Center for Disease Control in September 2013. PARA would decrease the livestock’s unnecessary exposure to antibiotics, and help to preserve our medicine’s live-saving properties.

“The incidence of community acquired multi-drug resistant bacteria bred by these practices is rising at an alarming rate, which is a critical public health threat,” said Dr. Davenport.

“We can try our best to make the right choices as consumers, but many people don’t have the good fortune of knowing their farmer and what is in their food,” echoed Fuguitt. “We support the Providence City Council in doing the right thing and taking a stand for Rhode Island’s health.”

The resolution, sponsored by Councilman Seth Yurdin, is to be voted on at the February 6th City Council Meeting. If passed, Providence would become the first city in the country to pass a resolution in support of a federal ban on the misuse of antibiotics on factory farms. The meeting will be held at 7PM in the City Council Chambers, 3rd Floor, City Hall (25 Dorrance St, Providence, RI 02903). For more information on the campaign, visit www.foodandwaterwatch.org.

In our constant mission to bring new concepts and food to the West End and Providence, the boys and girls at north are crazy excited to announce that we will be opening a bakery this spring on the corner of Battey and West Fountain Streets! Kelly Dull has joined our team and will be heading up the pastry program at the space. It will be a non-traditional American bakery, in the spirit of north, open from the morning until early evening. An array of sweet and savory baked goods will be available – scones, cookies, breads, granola, wedding and non wedding cakes, either packed to go or to be eaten at our tables. We will also be offering full service coffee, produced by local roasters and prepared by dedicated baristas. The menu will be rotating as we go through the different growing periods, sourcing locally when we can, but with a focus on always being delicious – if a bit different.

north
north is a nontraditional American restaurant at 3 Luongo Memorial Square in Providence RI. It opened in September of 2012 and has garnered praise and criticism from lots of folks. It is run by a group of friends and is open for dinner seven nights a week.

Kelly Dull
Kelly has lived and worked in various places all over the country, including NYC, Cleveland, and LA. She feels incredibly lucky to have learned from some of the best chefs, pastry chefs, and cake decorators in the country, including Wendy Kromer of Martha Stewart Weddings fame. Kelly most recently worked in Chicago running the kitchen at a well-known bakery and teaching cooking classes on the side.

James Mark
James is the cook/owner/plumber/garbageman/shoveler/gopher/cat wrangler of north. He most recently worked at Nick’s on Broadway where he developed their in house bread program, among many other jobs, and the Red Fez where he was the head of hot dog R&D. In 2008 he helped open momofuku ko in NYC, and a year later he helped open Momofuku Milk Bar with Christina Tosi as their bread baker.

Aquidneck Honey, supplier of pure, raw, local, chemical-free honey, launched an online storefront over the holidays. In addition to some of the best honey I’ve tasted delivered in 1 pound and large quart containers, Aquidneck Honey sells cut honey comb, a number lip balms in assorted flavors and honey straws, which are an excellent treat. Aquidneck Honey also makes up gift baskets with an assortment of their products and other local goods. For a limited time when you make a purchase totalling $50 or more and enter the promo code “hat” you will receive a free Aquidneck Honey baseball cap. If you can’t buy direct from Jeff the Bee Man at several farmers markets and local supermarkets, you can still get your Aquidneck Honey fix at http://aquidneckhoney.com/store.html

Easy Entertaining Inc., a full-service catering company dedicated to preparing local and fresh food, is launching a Grab and Go Lunch service from their new location inside the Hope Artiste Village at 1005 Main Street in Pawtucket (home to the Pawtucket / Wintertime Farmers’ Market). Take out lunch will be prepared Wednesday through Friday from 10 a.m. – 2:30 p.m. each week and the menu will change weekly. To sign up for a weekly emailed menu, email [email protected] and ask to be added to their weekly lunch menu distribution. For this upcoming first week the offerings include: Roasted Root Vegetable Soup ($3.95), Baffoni Chicken & Rice Soup ($4.95), The Locavore’s Garden salad ($4.95) and The California Skinny Chicken Salad ($6.95). You can view their menu here on Eat Drink RI.

On Friday evening, January 6, Thee Red Fez on Peck St. in Providence turned over their kitchen to James Mark, one of the cooks at Nick’s on Broadway and formerly a cook at Fez and Momofuku Ko in New York, for a late night menu that had been hyped during the days leading up to it with Twitter hashtags of #fezlatenite, #americaisethnic and #DumplingHaus. As you can see from the menu below Mark, along with Fez cook Tim Shulga, prepared a number of dumplings as well as bao, steamed buns that the much-lauded Momofuku Chef David Chang made into one of the hottest food items in New York a few years back. To say Mark nailed it would be an understatement. Everything on the menu was very well done with the standouts for me being the natang dumplings and the two buns.

Not to get all misty, but things like this is why food in our area is leaps and bounds ahead of other U.S. regions. We have talented chefs who make creative, interesting—let’s just say delicious—food, and a population who is willing to support it. Thee Fez sold out of all the late night menu items last night and Mark is doing it again tonight. Plus he told me he’ll be serving ramen this evening as well. If you like great eats and you think you have to go to New York or San Francisco for them, you’re wrong. Get yourself over to Thee Red Fez tonight. A special thanks should be given to Thee Red Fez owner Chef Ed Reposa for aiding and abetting Mark’s menu. 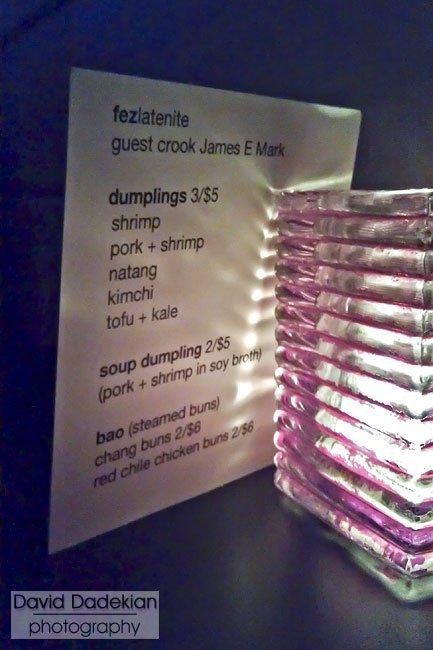