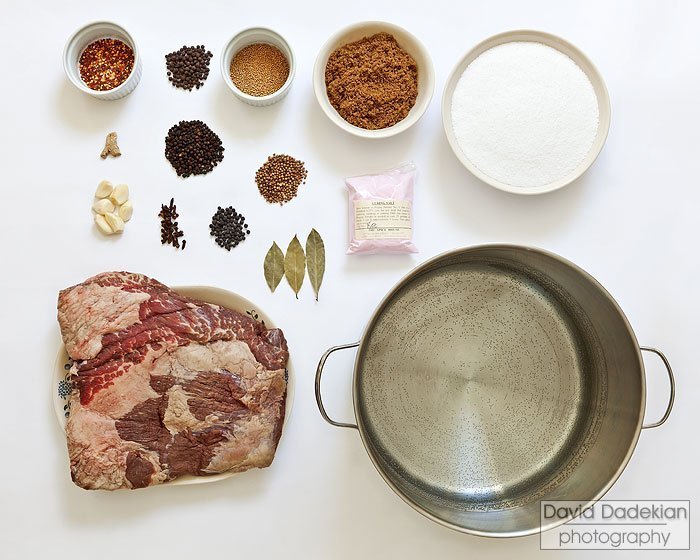 All the ingredients needed to create corned beef

One of the quickest and easiest ways to change the flavor of a food is to brine it. Essentially a heavily salted liquid with aromatics, a brine can add flavor to meats and fish, turn vegetables into pickles and, in the case of this month’s Charcutepalooza challenge, alter the profile of beef brisket into the popular March meal: corned beef.

When I was growing up, at some point in mid-March, there would be a pot of boiling water on the stove with an oddly pink piece of meat in it, along with some potatoes and other vegetables. Corned beef, so named because the large salt crystals used to brine the brisket resembled kernels of corn, the very Irish-American dish, was always served around St. Patrick’s Day in our Armenian-American home. I never really cared for it and when I no longer lived at home it wasn’t something I ever considered cooking for myself.

Around ten years ago I learned about brining from the same person it seems as if most of the world learned it from, Alton Brown. O.K., maybe I’m exaggerating, but it did seem like Brown brined a turkey on Good Eats and suddenly every home cook was trying it. In the days before I could easily find pasture-raised chicken, turkey or pork, brining made a world of difference in the flavor of supermarket meats that had had all the taste bred out of them. Now that I’m fortunate enough to buy really excellent local meat, I don’t brine as much as I used to, but it’s still an excellent technique for older chickens or very lean cuts of pork like chops or loin.

Or in the case of beef brisket, because you can turn it into corned beef that actually tastes delicious and not at all like something displayed in a huge pile in a supermarket refrigerated display once a year. A brined brisket can also be smoked and steamed into pastrami perfection, but to paraphrase Brown, that’s another article.

The corned beef you’ll see below started like most of my corned beef and pastrami creations of the last few years, with a good size, pasture-raised, 100% Angus brisket from Blackbird Farm (I work with the farm, but certainly wouldn’t work there if I didn’t love their beef). My brine is a combination of ingredients from a few different sources that I’ve played with over the years. When I began to assemble everything, the photograph you see above came into my head and I had to make it (see last photo for exactly what’s what). A few people who’ve seen the photo already have asked why the pink curing salt is still in it’s bag and not in a bowl. That’s because I have a crawling 1-year-old and while it may be an adventure if she gets a hold of a peppercorn or juniper berry, the nitrite should be kept secure (and then I thought the red pepper flakes and tiny mustard seeds were probably a bad idea to let loose on the floor as well). So after making the brine and submerging the brisket for about seven days in the refrigerator, I then had (uncooked) corned beef.

It’s been over twenty years since I’ve had to endure the Dadekian mid-March corned beef. In the meantime, I married an Irish-American girl whose family loves a boiled dinner. So now I happily “corn” a brisket a few times a year and the other night we had a Dadekian mid-March corned beef dinner, complete with boiled potatoes, carrots and onions. My mother-in-law made soda bread so I made rye. Hopefully, my Irish-Armenian-American daughters Brigid and Moira will look forward to it each year. 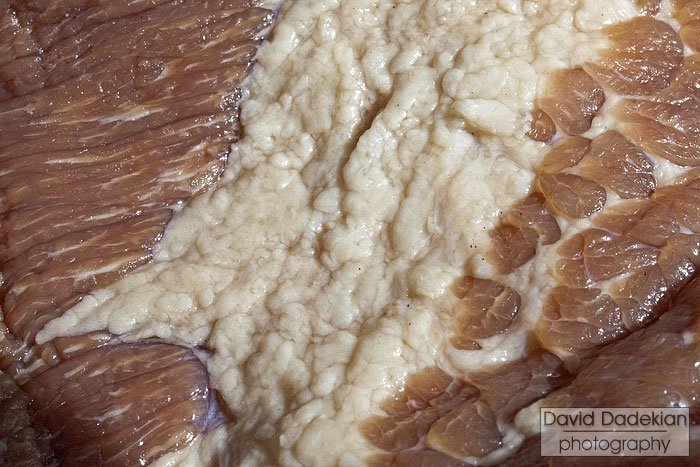 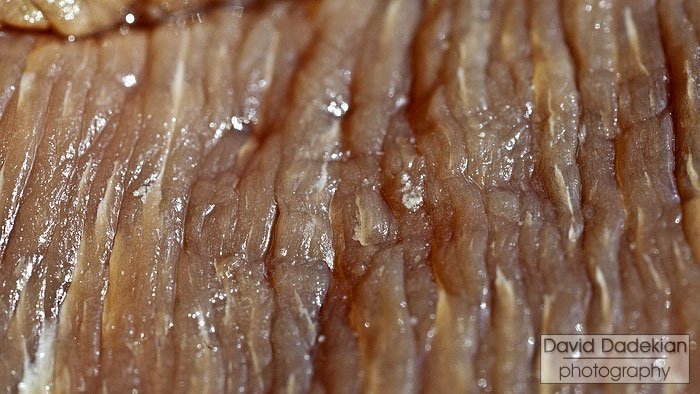 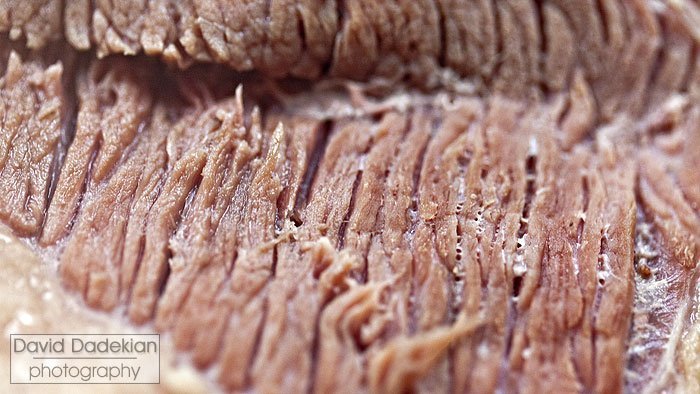 Those same fibers after cooking the brisket 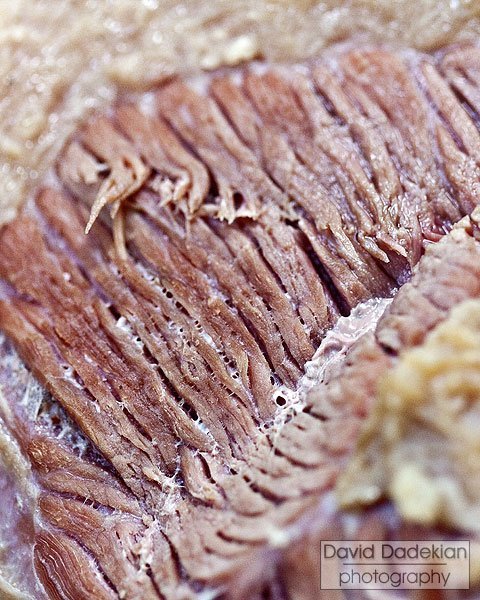 Another angle on the fibers and fat 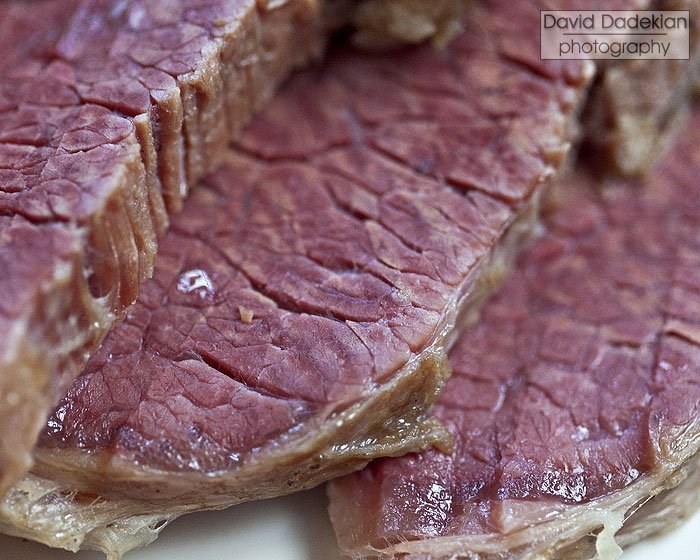 Corned beef sliced "against the grain" 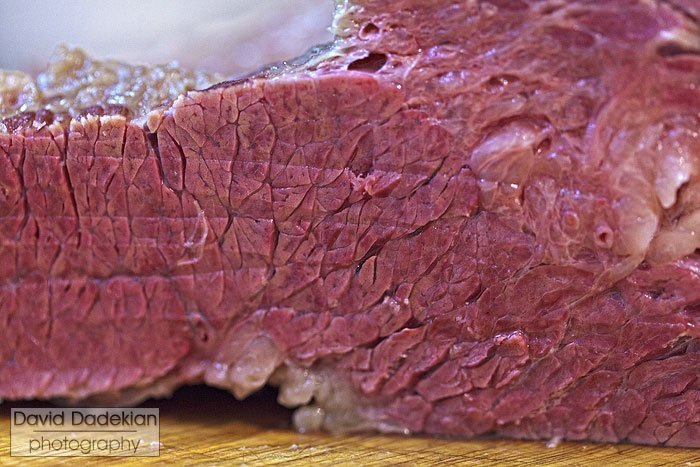 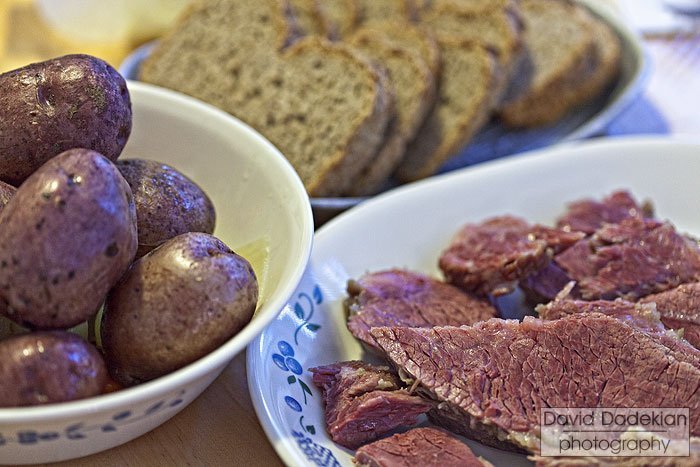 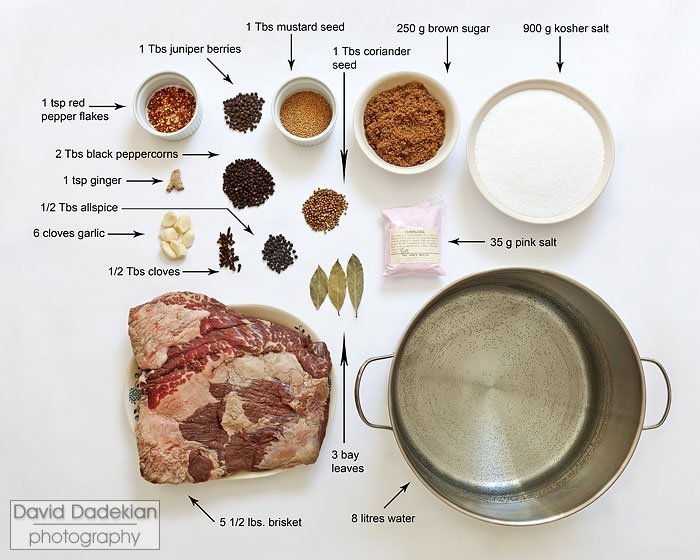 All the (labeled) ingredients needed to create corned beef

I’m going to let those words roll around your tongue for a while. Perhaps I’ll type them again.

Beautiful words, yes? Before February’s Charcutepalooza challenge was even announced I had acquired a thick, fatty, gorgeous pork belly from a pasture-raised Berkshire pig. It had been delivered on a Friday morning by Patrick McNiff of Pat’s Pastured farm in Jamestown, Rhode Island and then butchered in front of my camera by Chef Champe Speidel of Persimmon Provisions butcher shop in Barrington, Rhode Island. When the photo session was done (the photos will be in the upcoming spring issue of Edible Rhody) I said, “I’m buying that pork belly.” David, who works at Persimmon Provisions, also said, “I’m buying that pork belly.” Fortunately, there’s two sides to every animal, so we avoided pork belly tension. Have I achieved any kind of record for the number of times one can type “pork belly” in a paragraph?

I put the belly in my refrigerator, planning on spending some time that weekend curing it. I have often made un-smoked slab bacon (essentially slab pancetta) and had come very close to a recipe I liked the last time I had done it, so I had hoped to perfect it with the nine-plus pounds of belly now wrapped in plastic in my refrigerator. Clearly the pork belly has mystical powers because it was revealed on Saturday morning that the February Charcutepalooza challenge was The Salt Cure. How often do you find yourself with a large cut of pork belly and the possibility of winning a prize by curing that pork belly? I know what you’re saying: not often enough.

First thing I did was split the belly into two pieces. The extremely thick end weighed in at about 3 1/2 pounds and that was set aside for bacon. The rest, which was still pretty thick and proved a bit difficult to roll, I cured with the pancetta recipe straight out of Michael Ruhlman and Brian Polcyn’s Charcuterie: The Craft of Salting, Smoking and Curing. I still haven’t completely decided if I’ve perfected my bacon cure yet, but if you like your bacon a little on the spicy/savory side, you can give this a try:

Before closing, a quick story about my wonderfully faithful and protective black Labrador named Bayou (yes, she was born in Louisiana). I hang most of my charcuterie out in the open in our basement. Each time I hang a piece of meat, Bayou wanders down to the basement and sniffs every square inch of the floor, hunting for something she knows smells delicious, but she can never find it. I’m not sure if I’ll be upset or proud on the day Bayou finally figures out that all she has to do is look up.

Photos and captions will tell the rest of my curing tale. Thank you again to Mrs. Wheelbarrow and The Yummy Mummy.

Berkshire pork belly after curing for bacon, prior to roasting

Berkshire pork belly after curing for bacon, prior to roasting (reverse view)

pork belly cured for bacon, seen after roasting, fresh from the oven

the bacon now having cooled

cooked bacon, soon to be inside grilled cheese sandwiches, alongside a jar of glowing bacon fat

close-up of rolled belly and trussing

one half of the rolled pancetta