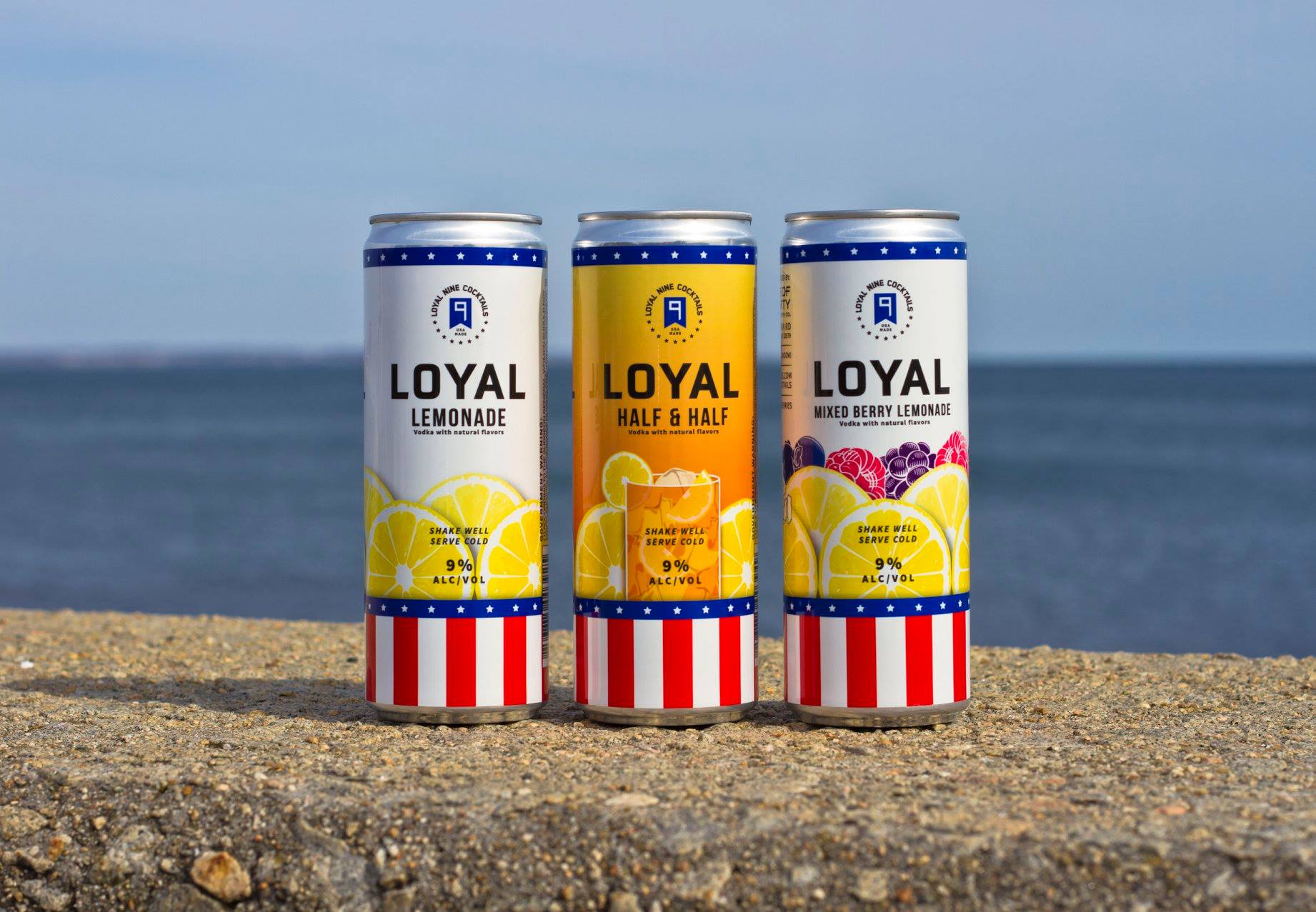 The Ready-To-Drink (RTD) category has been on an upward trend in recent years, most notably with the influx of many spiked seltzer brands. Loyal 9 Cocktails, however, differ from most of the popular RTDs in the market. “All of our cocktails are being packaged at 9% alcohol. You’re really getting a drink and a half per can,” said Mike Reppucci, President of Loyal 9 Cocktails. “Most seltzers, hard lemonades and teas are at 5% abv. We want to give our customers way more bang for their buck.”

If you’re worried about them tasting too strong or too sweet, don’t be. The team at Loyal 9 Cocktails uses all real fruit and zero artificial flavors. “We’re literally peeling thousands of lemons for these cocktails,” said head distiller Chris Guillette. “It definitely makes a difference. We focused on making them balanced, extremely refreshing and very drinkable.”

The Rhode Island based cocktails land in the middle of the spectrum for the RTD category. “You have the light and fizzy seltzers on one end, then the sugary hard lemonades and teas on the other end,” Mike explained. “Our cocktails are loaded with refreshing flavors, not bubbles, and you don’t feel like your teeth are coated in sugar afterwards. And the cherry on top…they’re 9% alcohol.”

The sleek, 12-ounce cans are sold in 4-packs for $11.99. They can be purchased at liquor stores throughout Rhode Island, Connecticut and Massachusetts or at Sons of Liberty’s tasting room in South Kingstown, Rhode Island. Distribution plans for Maine and New Hampshire are in the works. Customers can use the product locator on their website to find the closest availability: https://www.loyal9cocktails.com/find-cans.

Lark Hotels, the boutique hotel company with more than 20 properties in New England and beyond, will open the doors to its third Newport, Rhode Island property, The Cliffside Inn, on May 1st. Originally a 1876 Victorian manor that housed former Maryland Governor Thomas Swann and artist Beatrice Turner, The Cliffside Inn’s interior melds historic elements with modern touches. The year-round hotel is just steps from Newport’s scenic Cliff Walk, renowned coastline, and ornate mansions. In addition to The Cliffside Inn, Lark Hotels operates sister Newport properties The Attwater and Gilded.

The Cliffside Inn’s many preserved historical elements harken back to the home’s former identity as “Swann Villa,” so named by former Governor Swann, who first built the stately property as a residence. Redesigned in 2019 by Boston-based Rachel Reider Interiors, a rich palette of jewel tones, rich textures, and eclectic patterns pair old with new and traditional with bold to a charming effect. The quirky, eccentric spirit of artist Turner, who lived onsite for more than 40 years, is also captured in The Cliffside’s design.

The newly updated Cliffside Inn features traditional motifs mixed with modern touches to blend the property’s historic charm with contemporary style and amenities. Reider created a sophisticated design aesthetic that hints at Turner’s eclectic and mysterious persona while keeping with the time period. Dark details and a deep color scheme were inspired by Turner’s unusual choice to paint the home black during her residence there in an effort to deter onlookers. Original early 20th century furnishings range from four-post beds to armoires and ornate side tables, while modern touches give the hotel a contemporary feel of its own. Deep green, blue, and eggplant hues contrast the property’s gold accents and appeal to both history buffs and modern travelers.

“To me, Newport represents the essence of year-round New England travel,“ said Rob Blood, CEO of Lark Hotels. “We’ve celebrated its nautical history and the star-studded Gilded Age at our first two Newport properties, and with Cliffside, we really wanted to embrace this iconic building’s historic roots and prime location To me, this thoughtful redesign communicates the best of Newport – both old and new.”

Each of The Cliffside Inn’s 16 guest rooms and cottages feature unique designs, furnishings, and amenities. All rooms offer whirlpool tubs and/or spa showers, gas fireplaces, and unique architectural details original to the building. Rooms range from the petite, 210-square-foot Swann Room inspired by the property’s former persona as “Swann Villa,” to the 675-square-foot signature Cliff Suite where king and twin beds allow for three guests, while a private entrance and semi-private deck and seating area provide a peaceful, quiet getaway. Rates at The Cliffside Inn range from $180 to $650 for double occupancy depending on room type and time of stay.

From gourmet breakfast to plush beds, fine linens, and fireplaces in every room, The Cliffside Inn provides all the luxurious amenities desired from a large hotel in a personalized, boutique setting. Amenities include a gas fireplace in every room, small plates breakfast included with each stay, evening turndown service, wrap-around front porch, outdoor fire pit, onsite library and more.

Evelyn’s Drive In (http://www.evelynsdrivein.com), founded in the “summer of ’69,” is marking its 50th year as Rhode Island’s first stop for delicious summer fun with nightly food specials and the same dedication to community and good cheer that has made the restaurant a landmark on the East Bay.

“We’re excited to be open for the 2019 season and sharing this amazing milestone with our loyal customers and newcomers alike,” says Jane Bitto, who owns Evelyn’s along with her husband, Dom. “Evelyn’s is all about family and good times, and we look forward to celebrating with old friends and new.”

To make its anniversary year even more special, Evelyn’s is offering great midweek deals that include $10.99 fish and chips on Mondays, $10 fish tacos on Tuesdays, $10 cheeseburgers and fries on Wednesdays, and $6 chowder and clam cakes Mondays through Thursdays.

Famous for fresh seafood, including Rhode Island clear clam chowder, fish and chips, lobster rolls, and its unique lobster chow mein, Evelyn’s was opened in 1969 by Evelyn DuPont, who began with a simple menu and takeout service catering to families heading to the beach.

As business grew, the original clam shack was expanded by moving a building from further down Main Road in Tiverton and attaching it to create a dining room. (Today’s visitors can still see the original address on a sign hanging on the building.)

Working at the restaurant seven days a week, Evelyn built a strong following thanks to her fresh, affordably priced, and meticulously prepared food. (“If you’re in a hurry, you’re in the wrong place,” another sign once read.)

After nearly 18 years, however, Evelyn was ready to move on and put her namesake restaurant up for sale. The Bittos showed up at just the right time. “We took a wrong turn and stopped for lunch, and heard the owner say the restaurant was for sale,” Jane remembers. Evelyn gave the Bittos her recipes and helped them take over the operation in 1987.

Over the decades, Evelyn’s has survived a fire and changing dining habits by staying true to quality ingredients and classic recipes while adding new menu items like fish tacos and an expansive drink menu, a waterfront patio and dock, and — after a devastating fire in 2005 — an expanded dining room.

What hasn’t changed, however, is the Bittos’ commitment to the community and the family like atmosphere at Evelyn’s, where generations of East Bay residents have grown up with the restaurant’s food or working at summer jobs in the kitchen, dining room, and takeout window.

Evelyn’s also hosts a series of Singing Out Against Hunger concerts on Friday nights to raise money for charity. This summer, the free shows will take place on Aug 9. and Sept. 6; both shows will be from 5 p.m. to 9 p.m., performers to be announced.