Harvest Kitchen is doing a “Ready-To-Go” Mediterranean inspired dinner for two, including 1 appetizer to share, 2 entrees and 2 desserts.  You must order ahead and ordering will close at midnight on January 14.  Pick up is January 21 between 10 am and 4 pm at Harvest Kitchen at 2 Bayley Street.   Check out the full menu and details here

Foolproof hosts Trivia night every Thursday with WRIK Entertainment on topics including pop culture, history, sports, current events, a music round, a picture round and more.  Trivia night this week is on January 13 from 6 pm to 8 pm.  Have a beer and some fun at Foolproof on Thursday!!

The January Trachtenabend will be held at the German-American Cultural Society on January 21 from 7 pm to 11 pm.  Providing entertainment will be the Tubafrau Hofbräu Band.  Dinner is a hearty goulash served with spätzle and carrots.  This is a pre-ticketed event – click here for tickets ($15.00) and more information.

I’m happy to share with you that the Blackstone Valley Tourism Council will soon be moving their office to Central Falls, on the third floor of a renovated mill building along the Blackstone River – and we’ve got some fantastic culinary neighbors!!!

Shark’s is our “downstairs neighbor”, occupying the first and second floors of the building.  They are already open and their food is delicious and the presentation is beautiful!   The restaurant is on the first floor and there is event and meeting space on the second floor.  There is also an outside deck overlooking the Blackstone River.  Shark’s is open 7 days a week from 12 noon to 10 pm.  Their website is coming soon, but you can check them out on Facebook.  Their location in Pawtucket (25 Pawtucket Avenue) is still open as well.

Our neighbor “across the parking lot” is Royal Fried Chicken in a beautiful new building.  (They also have locations in Pawtucket and North Providence).   Their Grand Opening in Central Falls will be on Saturday, January 15.  From 11 am to 3 pm on opening day, get a free lunch plus 50% off the full menu.   We were fortunate to have a “sneak peek” lunch there and the food is so good!   Don’t miss out on free lunch at the Central Falls location this Saturday!

CHAMPIONS FOR A MORE JUST AND RESILIENT RI FOOD SYSTEM, APPLY WITHIN

The need to strengthen and develop Rhode Island’s food system has never been greater, and the Rhode Island Food Policy Council (RIFPC) is working diligently across our 49 cities and towns to create those solutions. Their goal:  to build a more equitable, economically vibrant and environmentally sustainable local food system. The organization’s annual call to join the Council opens January 10.

As an independent statewide network, RIFPC is composed of Rhode Islanders who work in and around the food sector who want to have a hand in creating new systems, promoting good food policy, filling gaps, and strengthening the capacity of our local and regional food system. Issues like universal free meals at schools, dockside fisheries permissions and American Rescue Plan Act funding recommendations are some of the priorities the Council addressed in 2021.

“Simply being able to make a difference in the lives of others means so much to me. My involvement with the RIFPC has reinforced this and I am grateful. You know you are alive because of the existence of other people around you and to touch their lives in a meaningful way is the essence of life. It is a blessing to share what you have been blessed with.” Council Member Alice Howard, SunRise Forever, Inc. and World Financial Group

Council members represent a diverse and culturally-rich Rhode Island, offering unique perspectives from across the food landscape. Collaboration among RIFPC Council members has reached every facet of the food system, from cultivation to composting.

Applications close February 18. Nominations welcome. To apply or learn more about Council membership, and other ways to get involved with RIFPC’s initiatives, visit www.rifoodcouncil.org. 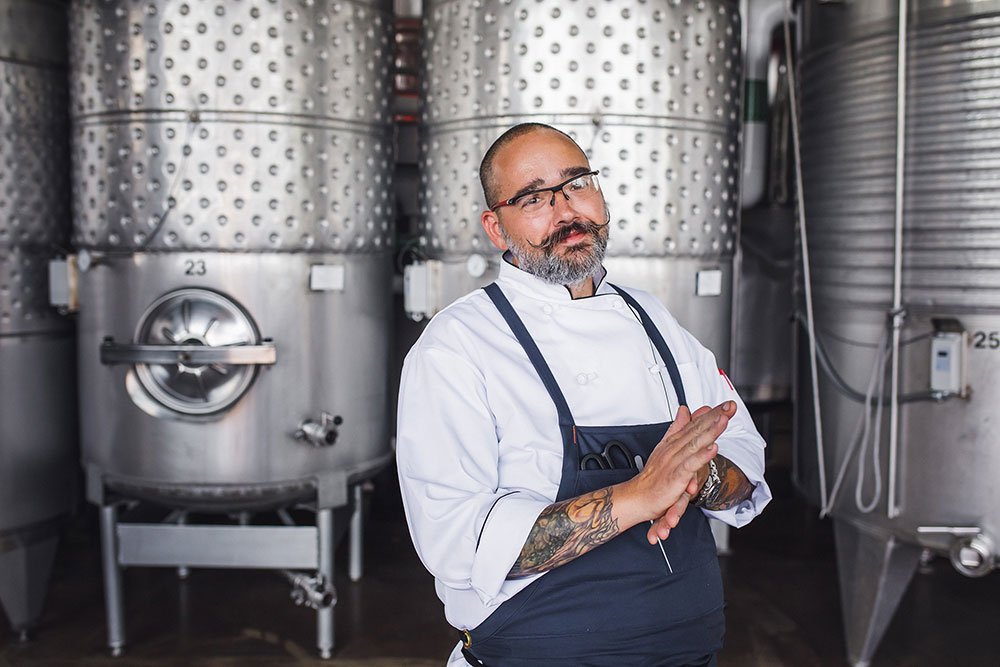 A Hero Among Us

Newport Vineyards is pleased to announce that Executive Chef Andy Teixeira has been honored with Edible Rhody’s 2020 Local Hero Award. Each autumn since 2007, readers of award-winning Edible Rhody magazine have been invited to vote for their Local Heroes, as a way to honor the people who bring us our local food and drink. Readers vote for the chefs who feed us; the food artisans who create delicious local food products; the beverage artisans who craft unique beers, wines and spirits, the farmers who produce flavorful foods; the food, wine and retail stores that inspire us; and the nonprofits that effect change in our food community. Chef Andy won in their Chef/Restaurant category.

“Local is who we are, it’s just what we do here at Newport Vineyards,” says Executive Chef Andy Teixeria. “The relationship with my farmers and all the work they put into the food is where it starts for us. We are constantly texting updates of produce, products, or just making each other smile; it’s a friendship really.”

“Operating three kitchens with a fully farm to table scratch culinary program, with such positivity and creativity is no small feat. Chef Andy is a hero amongst the Newport Vineyards family and we are thrilled that Edible Rhody readers have recognized that very deserving title as well,” John Nunes, Newport Vineyards Owner.

The Boat House, located at 227 Schooner Drive in North Tiverton, RI, is pleased to name Marissa Lo as executive chef. Chef Lo, a graduate of Johnson & Wales University and a Cranston resident, brings more than a decade of expertise working with local seafood to the restaurant.

Chef Lo will lead the culinary direction of the seaside restaurant working alongside Director of Restaurants, Karsten Hart, to create inspired menus featuring coastal New England’s natural abundance of fresh seafood and local meats and produce. Prior to joining Boat House, Chef Lo spent the last nine years honing her skills as a chef and culinary leader at Legal Seafoods in Boston and at Legal C Bar in Dedham.

“We are so pleased to add Chef Lo to Newport Restaurant Group’s outstanding team of talented chefs,” said Karsten Hart, Director of Restaurants. “Since joining the Boat House team in November, she has made a noticeable impact on our kitchen culture and quality of our cuisine. I look forward to working with her to further elevate our guest experience.”

The Boat House, located at 227 Schooner Drive in North Tiverton, RI, is pleased to name Louis Capodilupo as general manager. Capodilupo, a graduate of Johnson & Wales University and a Rumford resident, brings more than 12 years of restaurant management to his new position.

“We are so pleased to promote Lou to general manager at the Boat House,” said Casey Riley, Chief Operating Officer, Newport Restaurant Group. “Since joining our team in 2018, he has proven to be a leader at one of our busiest restaurants in Newport and has risen to the challenge of elevating our guest experience in Tiverton.”

Capodilupo joined Newport Restaurant Group in 2018 as assistant general manager at The Mooring in Newport where he proved his leadership skills and deep commitment to hospitality at the busy waterfront restaurant. Prior to joining the company, Lou held management positions in many regional restaurants including Not Your Average Joe’s in Watertown, Norwell and Needham, MA; Bertucci in Wellesley, MA; and at Tavern in The Square in Burlington, MA.

The competition in this year’s Newport Burger Bender was stiff with a record-breaking 40 burgers representing 29 restaurants. But alas, the 10 days of tantalizing temptations have come to an end.

The Grill at Forty 1° North walks away with the award for the most votes in this year’s newly introduced non-beef burger category. “The Grill Vegan Burger” was comprised of a house-made chickpea, quinoa and roasted vegetable patty topped with marinated grilled red onion and vegan aioli, all served on a sea salt-dusted caraway roll.

Ten more burgers captured both hearts and palates alike. Local/regional media set out on a quest for the best while other top vote-getters have been recognized for their outstanding performance.

Jamie Coelho, associate editor at Rhode Island Monthly and author of The Dish: “I loved all of the burgers I tried, from the buffalo chicken mac-and-cheese-croquette-topped burger at Newport Marriott’s Skiff Bar to Stoneacre’s simple burger that is a prime example of what a burger should be, but my very favorite burger of all was from Mission. I like that Mission put a twist on the traditional burger by adding some heat from jalapenos and pepper jack cheese, smokiness from roasted poblano peppers and bacon, and sweetness from dill pickles. Every bite was a combo of spicy, smoky, and sweet flavors with a mouthful of perfectly cooked, medium-rare, responsibly sourced beef patty. The sourdough bread, sliced in half, also held the whole thing together well so it didn’t become a goopy mess in my lap.”

Rachael Thatcher, food writer and digital producer at The Newport Daily News: “I have to go with the Homer Burger from Brix. While it was over the top and outrageous, that’s exactly what won me over. Every ingredient was well thought out and made in house, and the attention to detail when it came to each individual element made for the perfect end result. Not to mention it was simply fun to eat. When it comes to the Burger Bender, I feel like you have to go big or go home, and Chef Andy Texiera went big with this one.”

Wendy Logan, Newport This Week: “I’d have to say that Forty 1° North’s The Grill Vegan Burger was my favorite. It so beautifully represented the category, bursting with fresh bits of veggies but substantive via the red lentils, chickpeas and steel cut oats. It was seasoned to perfection and contrasted beautifully with the pickled salad side. Total texture-flavor bomb.”

Ryan Belmore, Publisher and Editor, What’s Up Newp & What’s Up Rhode Island and crew: “Surf Club’s California Burger wasn’t the biggest or boldest and it didn’t reinvent the wheel, however it was well-executed, nostalgic and simply put, wonderfully delicious! Among three of us from What’s Up Newp checking out burgers over the last 10 days, that was by far our favorite collectively.”