We’re All In This Together

There are a number of resources–on the national level, state level and municipal level–that have been enacted to help small businesses during this time of great need. I receive dozens of messages and emails each day asking what’s out there or do I have more information. Below are links to all the application forms and fact sheets that I’m currently aware of, plus some other resources on unemployment insurance and health.

I am taking all information from official web sites and cannot be responsible for any rule or regulation changes–consult with your accountant, lawyer, loan officer, etc. I can recommend those professionals if you need someone.

The only way these types of aid get passed is by contacting our representatives at all levels of government and making the need to save small businesses, such as our restaurants, a high priority. Here are contact info and search sites for you to find who you should be talking with.

Find your Senator and Representative in the RI General Assembly

The Small Business Owner’s Guide to the CARES Act

City and Town Grants and Funding

Another Round, Another Rally

RI DHS is exploring an expansion of a SNAP Restaurant Meals Program (RMP) via a waiver. See details and complete the RI Food Policy Council form.

Streaming Service Promotions (if it helps, it helps!) 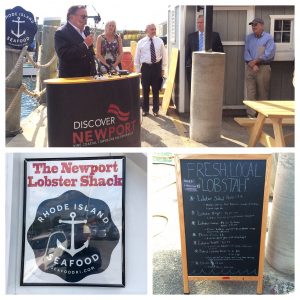 The Department of Environmental Management, in partnership with the Fishermen in Newport, hosted a grand opening and ribbon-cutting event today at State Pier Nine in Newport for the new Newport Lobster Shack Kitchen.

The Kitchen is an outgrowth of the popular Newport Lobster Shack Cooperative at the state pier on Long Wharf, where the Fishermen in Newport have been selling their catch – lobsters, crabs and conch – directly to the public since 2010. Now, with the new kitchen facility, the public has an opportunity to purchase a variety of freshly cooked items made directly from lobsters landed at Pier Nine. Visitors to Newport can now enjoy an affordable, local seafood meal ‘picnic-style’ under the shade pavilion on Newport’s working waterfront.

According to DEM Director Janet Coit, the Newport Lobster Shack Cooperative is a powerful model for the survival of local fisheries. By selling their catch directly to the public, the fishermen can earn better value for their product, while ensuring that visitors have a stellar Rhode Island seafood experience.

“I am pleased that economic and environmental sustainability were addressed with this innovative idea to support Rhode Island’s hard working fishermen,” Governor Lincoln D. Chafee said. “I thank Director Coit and her staff for their work to support our environment and economy.”

DEM Director Coit noted that this collaborative initiative with the Fishermen in Newport is one of DEM’s efforts to add economic value to the Rhode Island fishing industry. “All of the Kitchen’s menu items including fresh steamed lobster, lobster rolls, lobster bites, lobster cakes, and hand-picked local lobster meat come straight from the lobsters plucked by fishermen in local waters and landed right here at State Pier Nine. You can’t get any fresher than that!”

Lobster typically ranks as Rhode Island’s second most valuable commercial fishery, behind squid. Lobster landings in Rhode Island (including dockside sales) in 2013 totaled 2.1 million pounds for a value of $9.7 million. Approximately 645,000 pounds were harvested by Newport fishermen for a value of $3.1 million. As Rhode Island-landed lobster are processed and move into the wholesale and retail markets, the total value of the fishery increases substantially – likely approaching $28 million – making it a crucial part of the state’s economy. Rhode Island has approximately 250 lobster fishermen, with 45 landing lobster in Newport.

“I want to congratulate the Newport Fishermen’s Cooperative and all the fishermen here at State Pier Nine for coming together to make the Newport Lobster Shack Kitchen a success. This endeavor is really their vision supported by their investment of time, hard work, funding, and resources. I hope it will be a boon to their businesses and that continues to draw even more people to the Newport waterfront to enjoy some locally caught, fresh off-the-boat-fresh lobster and seafood,” said U.S. Senator Jack Reed, who has worked with Rhode Island lobstermen over the years to secure federal funding for lobster gear exchanges and an ongoing lobster data collection project led by the Commercial Fisheries Research Foundation. Reed has also been a champion of the “eat local” and tide-to-table movement in Rhode Island and led efforts at the federal level to help local growers, fishermen, and farmers market and sell their products.

Today, Senator Reed, a senior member of the Appropriations Commerce, Justice, Science Subcommittee, announced that the U.S. Department of Commerce will be providing another $190,000 in federal funding for URI, in cooperation with the Rhode Island Lobsterman’s Association and others, to design and test new types of lobster and crab gear.

House Speaker Nicholas Mattiello said, “I have focused my energy since becoming Speaker earlier this year on improving our state’s economy. The fishing industry is a very important industry, and I am proud to support efforts such as this one to promote our hard-working fishermen and women.”

President of the Senate M. Teresa Paiva Weed said, “This is a creative partnership that helps keep jobs in Rhode Island. The Newport Lobster Shack Kitchen supports an important industry, enabling fishermen to market locally harvested and locally prepared seafood direct to consumers. It wouldn’t have been possible without Director Janet Coit, and the Senate appreciates her commitment to working with the state’s fishermen to help maintain this vital industry.”

“I visit the fishing pier regularly and I am very excited to see this new facility being opened that will be so helpful to our local fishermen,” noted Representative Peter Martin of Newport. “As a former commissioner on the Atlantic States Fisheries Commission, I truly value the importance of Rhode Island’s fishing industry.”

Representative Deborah Ruggiero of Jamestown added, “The fishing industry is so important to our state’s economy and I am thrilled about the opening of the Newport Lobster Shack Kitchen. I buy lobsters year-round at the pier and it’s exciting to see the expansion from retail sales to a restaurant. I encourage everyone in our state to buy local and eat fresh!”
In addition to the Lobster Shack and Lobster Shack Kitchen, Pier Nine is the site of a farmers’ market that opened in collaboration between DEM and the Pier Nine fishermen in 2011. Located at the edge of Newport Harbor, the market is open Fridays from 2 p.m. to 6 p.m. through October.

The family-friendly Newport Lobster Shack Kitchen is open daily from 12 p.m. to 6 p.m. and is offering several grand opening specials through Labor Day.

The Pizza Gourmet Kicks Off Season at Fall Venues

From Rhode Island across the nation, The Pizza Gourmet is adding to football fans’ enjoyment this new season. The Pizza Gourmet real wood grilled pizza is being served from pregame to the final gun at pro football venues including Gillette Stadium in Foxboro, Massachusetts. The specialty pizza made only from hand-stretched dough grilled at 1800 degrees over real oak and maple wood is served to VIP guests at games as well as in the clubhouse.

Baseball fans enjoy The Pizza Gourmet as well at the home of Cleveland’s big league club, Progressive Field.
And this fall and winter, hometown fans will have the advantage at the University of Rhode Island where a Pizza Gourmet-themed concession stand will open in the Ryan Center. URI’s athletic department and fraternity/sorority foodservice is featuring the real wood-grilled pizza as well.

The Pizza Gourmet and The Catering Gourmet will unveil their brand new food truck, The G Truck, at the Peace & Providence Festival September 6th at the Roger Williams National Memorial in Providence. The G Truck will be at select events throughout New England serving The Pizza Gourmet’s original wood-grilled pizzas and a full menu of food that can only be described as casual and fun. At the Festival, the Catering Gourmet will be located in eight food tents and will be featuring BBQ, doughboys, sandwiches such as sausage and peppers, wraps, ice cream and house made potato chips and fries.

At this year’s Newport Mansions Wine and Food Festival, the Pizza Gourmet will be joining the scores of celebrity chefs and winemakers who come to this world-class tasting and education weekend. The Pizza Gourmet’s wood-grilled pizza will be served at the Grand Tasting at Marble House September 20th and 21st.