The Rhode to Recovery: RI Food and Drink, Part 4 of 4

Red Stripe restaurants, located at 465 Angell Street in Providence and 455 Main Street in East Greenwich, are pleased to announce that Kari Carreiro has joined its Providence location as general manager. In her new role, Carreiro will oversee the day-to-day operations and work alongside AGM Mike Merluzzo, Chef de Cuisine Mike Lindenlauf, and the rest of the service and culinary teams of the restaurant.

Carreiro brings 23 years of hospitality and retail experience to her new position.  Most recently, Kari served as a general manager for the creative scratch kitchen concept, Not Your Average Joes, where she was responsible for the day-to-day operations of the restaurant, including hiring and training of staff and guest relations. Additionally, she has served as manager for Back Bay Restaurants and The Stockyard Restaurant in Boston. Kari also holds numerous nationally-recognized service industry certifications.

“We are thrilled to welcome Kari to our team,” said Jim Brosseau, Director of Restaurant Operations, Encore Hospitality Group. “She has earned great experience from some top-tier establishments, and this knowledge is a true asset to our organization. We look forward to working with Kari to further elevate the guest experience in Providence.”

A graduate of the Massachusetts College of Art, Carreiro currently resides in Attleboro, MA.

Brian Casey, president and owner of the Oak Hill Tavern and the Company Picnic Company, both located in North Kingstown, Rhode Island, has been named the 2019 treasurer of the National Restaurant Association (NRA), and is set to become chairman of the NRA in 2021. The North Kingstown resident is the first Rhode Islander to be appointed to the NRA Executive Committee in its 100-year history.

The lifelong Rhode Island resident and Rhode Island College graduate has served as a two-term chairman of the Rhode Island Hospitality Association’s (RIHA) board of directors in 2006 and 2007. In 2008, he was named “Caterer of the Year” by RIHA at its annual meeting and “Stars of the Industry” awards ceremony. In 2013, he was also named RIHA’s “Restaurateur of the Year.”

“We could not be prouder of Brian regarding his appointment to the NRA Executive Committee,” said Dale J. Venturini, President/CEO, RIHA. “To have a local restaurant owner, steadfast industry advocate and entrepreneur on the NRA Executive Committee is truly indicative of the excellence of the hospitality industry in Rhode Island.  We may be the smallest state in the Union, but thanks to the leadership of Brian and others like him, our voice is one of the strongest.”

The National Restaurant Association aims to lead America’s restaurant industry towards prosperity, prominence, and participation to enhance the quality of life for all that they serve. The NRA plans to build influences, build workforces, train and certify, and set goals to achieve – goals which Brian Casey is sure to tackle head-on.

“I am extremely honored to represent the hospitality industry in Rhode Island as the newly-appointed treasurer of the NRA Executive Committee,” said Brian Casey. “As a lifelong resident of the state, I recognize how fortunate I am to be given this amazing opportunity, and I very much look forward to the challenge ahead.”

Narragansett Creamery was awarded a Silver Medal for its Burrata  Cheese at the United States Championship Cheese Contest held March 5-7, 2019.

Each Narragansett Creamery Burrata is made by hand. Mozzarella is stretched to form a pocket where it is then hand-filled with Stracciatella, a mixture of “torn” mozzarella (Stracciare – to tear apart) cream, and a trace of salt.

This year, the U S Wisconsin Cheese Contest received 2,555 entries in 116 different categories from 35 states.

“We are honored to win this award in the Burrata category and to be included with such an outstanding group of dedicated and creative cheese makers,” said Mark Federico, owner and co-founder of Narragansett Creamery.

Launched in 2007 by Federico, his wife Pattie, son Mark Jr., and local food advocate Louella Hill, Narragansett Creamery is a family owned creamery based in Providence that uses milk from nearby New England farms to make its artisanal cheeses and yogurts.

“We thank our local farmers who supply us with excellent quality milk which enables us to create award-willing cheeses,” Federico said. 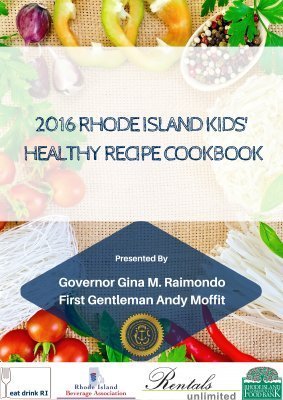 “As a mom, I know how important it is to start healthy eating habits from a young age,” Raimondo said. “My family and I had a great time getting to know the finalists and sharing stories from the kitchen. Thank you to everyone involved for your passion and dedication to creating a healthier Rhode Island.”

“This recipe challenge has been a great way to showcase the talent of our young chefs,” Moffit said. “Kids from all over Rhode Island submitted impressive recipes, and I can’t wait to try them out at home. Thank you to all of the creative students who participated, our fantastic judges and our partners, Eat Drink RI and the Rhode Island Community Food Bank, for their generous support.”

The kitchen at the Rhode Island Community Food Bank prepared and served the winning dishes to finalists and their families, along with local elected officials and community members. The Governor’s Office received 126 recipes for starters, entrees and desserts from 5th-8th graders throughout Rhode Island and chose 6-7 finalists for each category. The finalists’ recipes were compiled into the 2016 Rhode Island Kids’ Healthy Recipe Cookbook.

The meal began with “Tabouli,” a starter submitted by Chef Sofia Sweet. Sofia is a fifth-grader at Fishing Cove Elementary School in North Kingstown. She chose to submit her tabouli recipe in honor of her grandmother, who made the dish for Sofia’s birthday every year before she passed away.

Then, guests enjoyed Chef Cameron Belisle’s “Cod Fish Tacos,” as an entree. Cameron is a fifth-grade student at Stone Hill Elementary School in Cranston. He and his family enjoy an active lifestyle, cooking and recently running a 5K race together.

The luncheon concluded with “Apple Roses,” a dessert submitted by Chef Lily Addonizio. Lily is a fifth-grader at Immaculate Conception Catholic Regional School in Cranston. Her recipe for apple roses was chosen not only for its healthy ingredients, but also for its creativity and delicious taste.