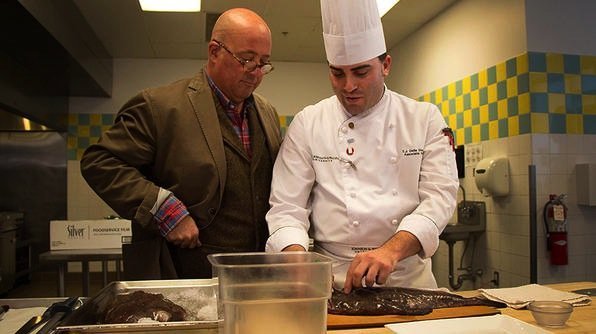 Followers, friends and fans of some of Rhode Island’s favorite restaurants, stores and farms saw a number of photos back in mid-December 2012 featuring culinary explorer Andrew Zimmern as he visited Rhode Island to tape an episode of his show “Bizarre Foods America.” The hour-long episode featuring the Ocean State is airing on the Travel Channel on Monday, August 5th at 9 p.m. EDT.

Zimmern travelled all over the area seeking out the things that make the Rhode Island regions food’s unique. Shops featured in the episode are Antonelli’s Poultry Co., Tony’s Colonial Foods and Venda Ravioli on Federal Hill. Zimmern also went out in the water of Matunuck Oyster Farm with owner Perry Raso, checked out the seafood from Brown Family Seafood and Bomster Scallops, stopped in Portugalia in Fall River, Mass., cooked sea Robin with Chef Matthew Jennings at Farmstead Inc. and spent the day in a culinary lab at Johnson & Wales University.

JWU Chef Instructor Branden Lewis enjoyed the television experience on Zimmern’s show saying, “It’d be fun to say that working on an episode of Bizarre Foods with Andrew Zimmern was in itself a bizarre adventure, but it was actually quite surreal. Chef T.J. DelleDonne and I, along with a top notch squad of students were amazed at how organic the show ran with Andrew directly at the helm. We just started cooking and he jumped right in, camera crew and all.” One of Lewis’s students, Dana Reale, added, “It was a pleasure working with Chef Zimmern and his crew. I was proud to be able to showcase our school as well as sustainability in the culinary industry.”

Make sure you watch “Bizarre Foods America” on The Travel Channel on Monday, August 5th at 9 p.m. to see it all. The Travel Channel can be found in Rhode Island on Verizon FIOS channel 170 or 670 in HD, and on Cox Cable channel 33 or 1033 in HD.