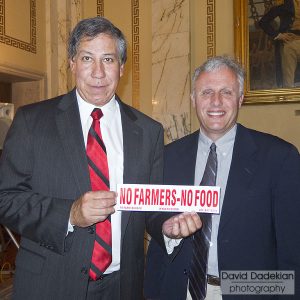 Avalos began his speech detailing his farming background growing up in New Mexico and working in Texas, and wrapped it up by underscoring the importance of farming to Secretary of Agriculture Vilsack with the full support of the Obama administration. In between he announced to a very proud audience, “RI farmers have led the nation in farm direct sales.”

Eat Drink RI had the chance to speak briefly with Under Secretary Avalos after his speech.

Eat Drink RI: What falls under your role for local food?

Edward Avalos: We can partner with retailers, non-profits, local food distributors and we can address that issue of getting impressive, healthy, local grown food into what we call food desserts.

EDRI: What are you seeing around the country regarding local food?

EA: I know in other parts of the country, I’ve talked to some retailers and they understand the need and feel they can address it and still generate a profit. [One example] is H-E-B supermarket in Texas. To brag about H-E-B a little bit, I got to know them from my job in a previous life selling them chili peppers. They have an initiative within their company called “Know Your Farmer, Know Your Food,” same name as the USDA initiative, but actually H-E-B had it before we did. They strongly believe in buying local and supplying local. Their stores are focused around the produce department and the meat department. So they can help us in their part of the country.

EDRI: What’s your impression of Rhode Island so far?

EA: Rhode Island really is a leader in the country in the direct market. You have a good population base to grow from, but someone has to have the desire to do it. You have farmers who do that extra bit to be successful.

EDRI: What do you think about Rhode Island going forward?