The Rhode Island Food Policy Council (RIFPC) unveiled its food system snapshots last week to the Inter-agency Food and Nutrition Policy Advisory Council, sharing data about the food systems of all 39 Rhode Island cities and towns, as well as for the entire state. All 40 snapshots are available to download on the RIFPC website at www.rifoodcouncil.org.

On the heels of Governor Raimondo’s announcement that Rhode Island will be developing a State Food Plan, the release of these data will help stakeholders better understand the food systems of their state and communities, and identify leverage and action points from which to evolve and improve. RIFPC Chair Ken Payne notes, “food systems have to work at a community level, otherwise people, especially the most vulnerable, are put at risk; therefore the components of the food systems need to be understand locally. Let’s be clear- living in a place that has great, nutritious food is wonderful. We in RI are blessed to have an outstanding food culture. Good local food is a building block to a healthy future.”

These fact sheets are a first: comprehensive, locality-by-locality information about the food system in a state. They bring attention to the importance of food system impacts and issues – economic, social, and environmental – while remaining accessible and available for laypeople and experts alike. “The ability to collect, analyze, and clearly communicate data is central to our work to improve health outcomes for all Rhode Islanders,” said Nicole Alexander-Scott, MD, MPH, Director of the Rhode Island Department of Health. “I applaud the Rhode Island Food Policy Council for this innovative new initiative. It will help us better understand the food system in Rhode Island communities so that we can eliminate gaps in access to food and boost our food economy, which will benefit the entire state.”

Leo Pollock, RIFPC Network Director, noted that this was an unprecedented effort, “we had no roadmap for how to proceed, and we learned a great deal along the way.” Lessons learned include that in some cases, there is no available source for specific data by municipality. The number of farms is one such data point. No entity maintains a complete list of farms, so the best municipal numbers were compiled from RIDEM and Farm Fresh RI lists, which are incomplete. The 2012 Census of Agriculture does not provide information at the level of municipality, so as a result, the number of farms reported in the fact sheet for Rhode Island was quite different from that of the Census.

While these fact sheets represent a single moment in a local food system, over time, as future series of “snapshots” are developed, the set as a whole will provide a dynamic picture of the evolving food system in our state and communities. “Rhode Island is experiencing exciting growth in its agricultural and local food sector,” said DEM Director Janet Coit. “These snapshots offer a valuable glimpse into the diversity and breadth of our food system; we look forward to working with the RI Food Policy Council and other partners to continue to build upon resources like this to shape stronger food policies for our state.”

The work of the RIFPC is made possible by the generous contributions of the Henry P. Kendall Foundation, van Beuren Charitable Foundation, and the John Merck Fund. Their contributions, along with funds from the Rhode Island Agricultural Partnership, supported the development of these fact sheets. 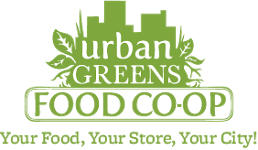 In an event at the Columbus Theater this evening, Urban Greens Food Co-op announced the future location of its consumer-owned grocery store. The retail store will be located at 93 Cranston Street, the site of the old Louttit Laundry building. The co-op store will be the anchor commercial tenant in a mixed use development including 39 residential units. Urban Greens will occupy a 7000 square foot retail grocery space. The Co-op will be a full-service grocery store, though it will emphasize natural, healthy, and local food in its product mix. This announcement comes after a multi-year search and planning effort by the Co-op’s Cooperative Council & Site Committee to secure a viable site for Providence’s first consumer-owned retail grocery store.

The former Louttit Laundry site has been abandoned since 1985, and an empty lot since 2008. Owned by the Providence Redevelopment Authority (PRA), it was a Brownfield site, requiring environmental remediation. The city was supportive of the co-op’s desire to locate the store on the site, and the PRA and Urban Greens have worked together over the last two years to create a plan for the site, and bring the appropriate developer on board to purchase and develop the site. The development team is a partnership of Bourne Avenue Capital Partners, D+P Real Estate, and Truth Box Studio.

Urban Greens grew out of a group of residents need for a full-scale grocery store on the west side of the city, especially one that offered healthy & local goods. “This site is ideal in so many ways for Urban Greens Food Co-op. It’s situated at the nexus point of three diverse neighborhoods: Federal Hill, West End & Upper South Providence, as well as being just west of downtown, and easily accessible from I95 and Rts 6/10” said Philip Trevett, an Urban Greens Cooperative Council Member, “we’re incredibly excited to help meet the food needs of our immediate neighborhood residents by while at the same time helping to expand consistant retail access to locally sourced foods in the Providence Metro area.”

Founded by a group of residents on the west side of Providence lacking a full-scale grocery store and seeking increased access to healthy foods closeby, Urban Greens Food Co-op now has 630+ member-owners, made up of residents of the surrounding neighborhoods, as well as from across the city and the state–all excited to spend their food dollars at a community-owned and invested grocery store. The innovative ownership model of a consumer co-op will ensure that local sourcing is a strong priority, and that profits stay in Rhode Island. The store will help fill a missing link in Rhode Island’s growing food economy by providing local farmers and producers a new, stable, year-round sales opportunity, and significantly increasing the consistent availability of local products to consumers. The store will provide and promote local, healthy, affordable, and culturally appropriate food options. The Co-op will support the local economy by creating new jobs, supporting local farmers and producers, and reinvesting its profits locally.

Urban Greens Food Co-op announced the future location of the Co-op’s much anticipated retail grocery store in a celebration and informational session at the Columbus Theatre on Thursday, December 3rd. Together with the project developer, the Urban Greens Council and Site Committee unveiled initial plans, including preliminary building design, as well as presenting information about the Co-op’s funding structure and overall project timeline. Representatives from the City and the State joined the evening’s speaking program: Peter Asen, Director of the City’s Healthy Communities Office, Mark Huang, the City’s Director of Economic Development, and Ken Ayars, Chief of the Rhode Island Division of Agriculture.

Please visit http://www.UrbanGreens.com for more details, or get in touch with us using the above contact info if you have further questions.

A total of $244,109 will be invested to support specialty crop production and sales in Rhode Island

The Department of Environmental Management announced today the award of farm viability grants to six Rhode Island-based groups working to support local farmers; the grants, totaling $244,109, are made possible by the U.S. Department of Agriculture (USDA) Specialty Crop Block Grant Program and will support efforts to increase specialty crop production and grow the marketplace for these crops in Rhode Island.  USDA defines specialty crops as fruits and vegetables, dried fruit, tree nuts, and nursery crops, including floriculture and turf grass.

“Rhode Islanders take great pride in their agricultural heritage,” said Governor Raimondo.  “The exciting growth of our local food economy is a testament to that history and expertise – supporting thousands of jobs, businesses, and families across the state.  We all play a role in moving our state forward, and I am proud of these grant recipients and their efforts to support Rhode Island food producers and to foster innovation and growth in local agriculture.”

“We are thrilled to announce these awards that help to sustain our local farming industry and support the livelihoods of so many families in Rhode Island,” said DEM Director Janet Coit.  “Promoting growth in this important economic sector requires a coordinated yet varied approach that focuses on supporting growers and cultivating their practices but also increasing consumer knowledge and demand.  We are pleased to reflect this approach in the diversity of initiatives funded in this grant round and look forward to the success of these projects.”

In addition to funding these grants, USDA awarded $63,921 to DEM to strengthen the “Get Fresh, Buy Local” campaign.  The funds will be used to support specialty crop sales and improve promotional materials and activities, including featuring produce demonstrations by local celebrity chefs at farmers’ markets. To date, DEM has awarded more than $2 million in farm viability grants to support the competitiveness of locally-grown specialty crops.

Rhode Island is experiencing significant growth in its agricultural and local food sector.  The state’s food system supports 60,000 jobs in Rhode Island and more than 7,000 businesses.  Rhode Island is home to more than 1,200 farms – which are largely family operations and occupy a total of 68,000 acres across the state.  The Ocean State is a national leader in direct-sales to consumers, with approximately 50 seasonal farmers markets in the state’s urban, suburban and rural areas; eight indoor winter markets; and numerous pick-your-own and farm-stand operations.