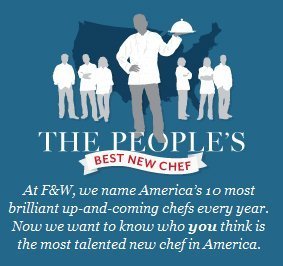 Each year the editors of Food & Wine magazine select ten chefs from around the country as the Best New Chefs. In addition to the editors’ selections, there is also The People’s Best New Chef. Food & Wine has nominated 100 chefs—ten chefs in ten regions of the United States—and now the online masses have until March 11 to whittle that down to one People’s Best New Chef. In the New England region Rhode Island has three nominees: returning from last year’s nominees are Cook & Brown Public House‘s Chef Nemo Bolin and Tallulah on Thames‘s Chef Jake Rojas. This year also nominated is The Dorrance‘s Chef Benjamin Sukle.

Please vote for your favorite and show the country that Rhode Island has Food & Wine‘s The People’s Best New Chef 2012: New England. Eat Drink RI has reached the three nominees for their thoughts.

Nemo Bolin, Chef/Co-Owner at Cook & Brown Public House: “We’re super pumped. This nomination is a testament to how hard our whole team works each and every day. It’s great to get recognized and awesome that there are three chefs from Rhode Island being represented this year.”

Jake Rojas, Chef/Co-Owner at Tallulah on Thames: “Its such an honor to be considered for this award. I’m so happy to see more Rhode Island chefs in the running this year. We all are huge supporters of local farms, fishermen, and artisans. We love Li’l Rhody!”

Benjamin Sukle, Executive Chef at The Dorrance: “Congratulations to all of the other candidates and their staff. Very fortunate to even be considered and it can only help bring more spotlight to our state. There are a lot of really great things going on in Rhode Island and I hope more and more people become aware of it. The team, that I am fortunate to have, work really hard and deserves just as much praise and credit for this as I do.”